This is a special “extra” feature for Lives Matter? Really? Are You Sure?, an outtake from the original story above. 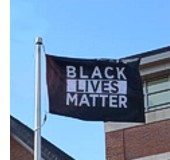 The UVM Student Government Association ran a Black Lives Matter flag up the flagpole on Thursday. Not everyone is saluting. The black flag is flying next to the American flag and the Vermont state flag in front of the UVM student center. Flags representing other groups have flown from the same flagpole.

Many dissenters think reported that an organizational flag should not be flown at the same height as the American flag, period. Especially at a place of higher learning.

The United States Flag Code establishes the rules for display and care of the national flag of the United States of America. It is a federal law, but the penalty for failure to comply with it is not enforced.

Displaying flags from different causes is probably OK in the UVM context but UVM itself, in providing the pole they ran it up, obviously violates the U.S. Flag Code.

Now back to the Black Lives Matter protestors…

You can’t have an EARGASM, GAYPRIDE, GOD, JAYLENO, or SAFESEX in New York State, but apparently, unlike Vermont, DICK is OK.

Christo has authorized a team led by Vermont artist and water expert Parker Vogt to do a series of United States environmental projects starting this year.

Replay the Bay, their first project, will be unveiled with joint receptions in Highgate Springs and Alburg Springs, Vermont, tomorrow. They have covered the entire surface of Missisquoi Bay with a double layer of floating panels of woven polypropylene fabric. The top layer is the white of winter snow and the underlayer is a rippling, iridescent, blue-green. Read more…

Mark Zuckerberg announced a couple of weeks ago that he and his wife would give away $45 billion.

Actually, he said he would give 99% of their Facebook shares “during our lives” — holdings currently worth more than $45 billion — to charitable purposes through a new organization, the Chan Zuckerberg Initiative. 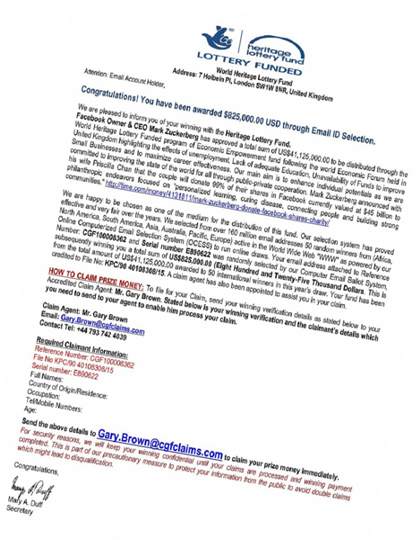 Almost immediately, I got a letter from “Mary Duff” for the “heritage lottery fund” of 7 Holbein PL, London SW1W8NR:

I smell a phish.

Shannon J. Miles, a “dark-complexioned” person of interest, is in custody after the deadly ambush of Harris County sheriff’s deputy Darren Goforth, fatally gunned down without warning Friday night while gasing up his patrol car.

This man was gunned down “execution style.” Where are the protestors?

Where is Al Sharpton?

Where are the outside agitators?

Could it be that the only people who play the race card think only their racists’ lives matter? Could it be that Mr. Sharpton and the other muttonheads just don’t get it?