Vermont’s plans for a statewide amnesty day made the news last week.

“Drivers!” Billy Mays might shout with a thumbs up. “Get your suspended license reinstated for the low, low cost of just $20 per ticket.”

This is a one day only deal!

“The idea is we have over 20,000 Vermonters who have suspended licenses and many of them are suspended because they can’t afford to pay the mounting fines,” said Gov. Peter Shumlin, D-VT.

Whatever happened to “Don’t do the crime if you can’t do the time.”

Secretary of Transportation Sue Minter’s amnesty task force has started reviewing likely options for a new law that could help open channels for Vermonters to have their licenses restored.

Turns out we’ve already had a very successful pilot project. Six months ago, hundreds of Vermonters turned out in Burlington for the experimental amnesty day. They could pay off old tickets for $20 apiece and have their licenses restored on the spot.

More than 1,200 people from five counties showed up, some with tickets 30 years old.

Lawmakers will likely introduce legislation next year that could help Vermonters beat their driver’s license suspensions because they weren’t able to pay the fines.

A separate initiative would create legislation to dismiss all tickets issued before 1991.

State leaders put forth lots of reasons to forgive these transgressors.

They can’t afford the fines.
They can’t get insurance.
It’s bad debt, so this clears the slate and gives them a fresh start.

“This is not a gift,” State’s Attorney TJ Donovan told WCAX. “This is in the interest of all Vermonters because while they are on our roadways, we know they’re driving illegally, but they’re also driving without insurance.”

So people who lost their licenses because they couldn’t pay a few hundred in fines will magically afford the thousand-dollar-plus insurance policies?

They can’t afford the fine, yes? I wonder how of the more than 20,000 Vermonters with unpaid tickets are low income?

“Uh, we do not have those numbers,” Gov. Peter Shumlin said.

A Connecticut man was clocked driving 112 mph on Interstate 89 in Royalton the other day. He was late for traffic court for a speeding ticket. He could probably use the Amnesty Day.

Whatever happened to Tony Baretta, anyway?

Apparently we’ll give you a pass on the crime if you’re poor and live in Vermont.

“This works so well, I wonder what else we could use amnesty for?” an unnamed state leader was overheard to ask.

Delinquent drivers can pay their discounted fines by check, credit card or money order. The state will not accept cash.

I don’t know about you but I still have a lot of turkey left over.

Different turkey here so I hope you stopped by for something other than the recipes.

Bo Muller-Moore is a folk artist in Montpelier, Vermont who made the national news today and not for his new spray paint/stencil prints at the Montpelier Art Walk. Those images at the Skinny Pancake honored some of the animals of Vermont and the cavemen that painted them first. 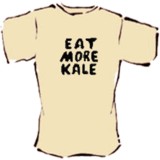 Mr. Muller-Moore has built a substantial home business around the words “eat more kale” which silkscreens on T- and sweatshirts. He calls it “an expression of the benefits of local agriculture.”

For the record, I put kale right up there with lima beans in the food pantheon but I will fight to the death your right to eat it. It is probably better for you than limas, too.

A couple of Mr. Muller-Moore’s friends, “Paul and Kate of High-Ledge Farm, penned the phrase over ten years ago when they special ordered two shirts for themselves. I must admit, I gave the design very little thought,” he wrote. “I drew the letters and cut the stencil in less than 20 minutes. I printed their shirts and delivered them at the next farmer’s market. The idea became ‘viral’ before people knew what ‘viral’ was, then quickly spread to all corners of the world.”

Mr. Muller-Moore has now filed a trademark application for “eat more kale.” About 30 seconds later, the second-largest chicken restaurant chain’s legal team sent him a cease-and-desist letter in which they listed at least 30 examples of attempts by others to co-opt the “eat more” phrase, attempts that they bullied into withdrawing. The letter ordered him to stop using the phrase and to turn over his website, eatmorekale.com, to Chick-fil-A. 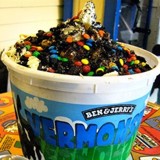 This is not the first time a Vermonter has had to stand up on his hind feet.

Matt Nadeau’s Rock Art Brewery is a micro brewery in Morrisville, Vermont. A couple of years ago they introduced a beer called “Vermonster” that ran afoul of the Hansen Natural brand “Monster” energy drink folks. The two settled the case when Rock Art agreed never to go into the energy drink business. As far as I know, Ben & Jerry never went after Mr. Nadeau for infringing on their 14,000 calorie bucket with the same name.

At the end of the day, I kinda don’t think anyone will buy an ‘eat more kale’ shirt thinking it was a Chick-fil-A turkey.

ABU DHABI, United Arab Emirates–A legal U.A.E. license plate with nothing but the numeral “1” was sold to Saeed Khouri at a charity auction for $14 million. Mr. Khouri has a number of automobiles and would not say which one might carry the record-breaking plate. News reports say Mr. Khouri is a member of a “wealthy” Abu Dhabi family. Ya think?

I have a yen for a special plate. In fact, last July 30 I sent the following message to a friend in Pennsylvania:

Here’s the rest of the story.

I’ve always wanted former local Ford Dealer Dick Wright’s “DICK” plate. His widow, Kelly, kept it after he died. Put it on a Toyota, I think, which would have had him chewing on the coffin lid for sure. She has moved to (where else) Florida.

A couple of weeks before this saga began, I bought an older LeBaron convertible from a fellow in southern Vermont. I decided to get the plate for it. After some fairly extensive discussions with DMV offices here and there I discovered that DICK was available again in Vermont but DICK was not available in Florida.

I asked a genuine DMV Customer Service representative if Vermont would let that vanity plate out again; she said, “sure.”

I drove to the DMV outpost in St. Albans and did the deed. The DICK was (supposed to be) in the mail.

Vermont DMV sent me a form letter. “THE CHOICE YOU WANTED HAS BEEN REJECTED,” the letter informed me, “BECAUSE IT IS A SLANG REFERENCE TO GENITALIA. PLEASE MAKE ANOTHER CHOICE OR LET US KNOW IF YOU WANT REGULAR PLATES.”

Now wait just a darned minute. I called DMV before I registered the car; they said the plate was available and the name did not appear on their “dirty word list.” And I know Dick Wright had it for years.

Girding my lions, I called DMV. Then I called again. And again. Then I wrote to DMV Commissioner Bonnie Rutledge. I told her that I am hurt that State of Vermont has decided that my own name (and the name of our popular former governor) is a “dirty word” and asked her to issue the plate as requested. She set up a hearing before a hearing officer.

Getting a vanity plate should not be this hard.

The hearing officer denied my application; the LeBaron now has HARPER in white letters on a lovely green aluminum background.

Here in Vermont the Guv gets plate #1, election but no auction required. The DMV tells me that they do not auction special number plates and that any specialty plate costs only 20 bucks extra. aot.state.vt.us/DMV has the history of plates in Vermont.

I’m thinking that Mr. Khouri couldn’t get DICK here, even for his $14 million although that would surely pay for enough litigation to win the darned thing.

I’m also thinking I know why my 12 gallon fill up just cost me $38.99 leaving me a bit short for the litigation.

“I needed some electrical work done,” a local homeowner told me the other day. “These licensed electricians come into your house, charge through the roof, and some of them don’t look smart enough to flip the light switch.”

Assuring that your doc has at least heard of the Physician’s Desk reference strikes me as a fine idea. And it is quite worthwhile to check if the person who designs your next highway bridge has maybe googled deflection formulae at one time or another.

“Yow! You can make some serious money as an electrician,” the homeowner said.

The State of Washington has its list of 410 or so licenses online here: dol.wa.gov/listoflicenses.html. 177 of them are handled by the “Department of Licensing.”

I can’t think up 400 categories of licenses and I’m really really good at making lists. I have to wonder how much of the licensing is about public safety and how much is about raising revenue.