I told SWMBO yesterday, “I’ll write about a new Alzheimer’s drug test on an old, old drug on the Ides of August.” If I remember.

As an aside, Shakespear taught us that the Scottish king Duncan died on this day in 1040, and the namesake of the Scottish play died exactly 17 years in 1057. That has absolutely nothing to do with mice nor men nor memory other than the fact that I am very glad to have remembered it.

Memory is not easy for some of us as we age.

According to the Alzheimer’s Association, Alzheimer’s is the most common form of dementia, a general term for memory loss and other intellectual abilities serious enough to interfere with daily life. Alzheimer’s disease accounts for 60 to 80 percent of dementia cases. It’s a progressive disease, where dementia symptoms gradually worsen over a number of years. In its early stages, memory loss is mild, but with late-stage Alzheimer’s, individuals lose the ability to carry on a conversation and respond to their environment. Alzheimer’s is the sixth leading cause of death in the United States. Those with Alzheimer’s live an average of eight years after their symptoms become noticeable to others, but survival can range from four to 20 years, depending on age and other health conditions.

It’s not just our memories it kills. It kills us. The advanced dementia impairs immune function and causes an inability to ambulate as well as incontinence and aspiration so many individuals with advanced AD contract deadly “intercurrent infections,” usually pneumonia. 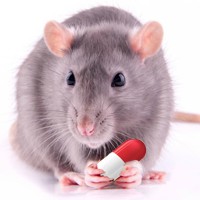 Researchers at the University of Manchester have found that giving mice mefenamic acid totally reverses memory loss within a month. Their data suggests that the fenamate non-steroidal anti-inflammatory drugs (NSAIDs) could be relabelled as Alzheimer’s Disease therapeutics. They published the study in the journal Nature Communications last week.

Scientists at Parke-Davis invented mefenamic acid in 1961. The U.S. patent was issued in 1964. The drug is long since generic and is available worldwide under many brand names including “Ponstel.” Doctors generally use it to treat moderate pain and it is well tolerated for post-surgical pain but it is not widely prescribed.

Oh. One might think that a widely available generic drug would be affordable!

And therein lies the rub. Mefenamic acid costs practically nothing to manufacture but price gouging here means that, if it does prove out as an Alzheimer’s drug, we won’t be able to afford it.

I think we should march on Washington about this pricing. We’ll meet a million-strong at the National Mall on Tuesday at noon. If we remember.