Feel the Bern but also Feel the Pain.

It’s a pain that will come no matter whom we elect this year.

“Things are going ‘so well’ with the truth of how our system works that we are bankrupting ourselves,” wrote a concerned citizen.

Every politician since the wicked Nimrod has lied to us. Oh, some told little white lies but they lied to us nonetheless. “We know how to fix it!” they all say.

“We are not Greece, we are not Portugal,” Mr. Obama said in 2011 as Standard & Poor’s and Moody’s prepared to downgrade America’s top credit status. 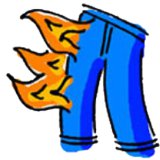 According to a new report by Kotlikoff and Michel, U.S. government debt stands at $210 trillion, not at the official $13.1 trillion nor the almost $18.9 trillion of the US Debt Clock nor the $86.8 trillion calculated by Cox and Archer.

For homework, try to find out if any member of Congress or the President has ever read these CBO reports.

The reality is far different. The real debt load works out to $643,406.20 per person in the United States, 16 times higher than the current official level and 2-1/2 times our total net worth.

In 2014 the net worth of all U.S. citizens was pegged at $80.7 trillion. Wealth is commonly measured in terms of net worth, which is the quite simple sum of all assets (what you have in the bank, the market value of real estate, like your home, any stocks and stuff you own) minus what you owe on all of that. which accountants call “liabilities.”

Mr. Sanders isn’t the only financial nincompoop. He’s just the most obvious among the economic geniuses we’ve elected.

A record Federal Reserve “reverse repo” auction on the last day of business means credit markets and mutual funds are in trouble. Like the “credit swaps” and off-balance-sheet financing that caused the Great Recession, the financial markets are again playing with numbers none of the geniuses understands.

“It is government’s fault for offering a housing finance program without making an effort to maintain underwriting standards,” then-Rep. Barny Frank (D-MA) said of the Housing Crisis.

That would be the same Barny Frank who imposed “affordable housing” requirements on Fannie Mae and Freddie Mac. Before he did that, the government lenders had been required to buy only prime mortgages. Mr. Frank forced Fannie and Freddie to meet a government quota for bad loans to borrowers who could never repay them.

The Dow fell 450 points this morning, on its way to the worst opening day in 84 years. The Fed figures it can’t head off or even contain the coming financial crises.

Meanwhile China’s government-managed stock market tanked again today, too. Looks like China’s politicians are about as good at this financial stuff as ours.

And none of this helps rein in the stampeding public debt.

Yeah, they’ll fix us right up.

How to Avoid Bankruptcy — For Dummies tells us:

OK, I added the last one but, hey! It worked for Genghis Khan, Rome, Great Britain, and Google, right?

* Let’s get specific. How high would Bernard Sanders go on tax rates?
“We haven’t come up with an exact number yet, but it will not be as high as … 90%.”

** “I applaud the people of Greece for saying ‘no’ to more austerity..
“In a world of massive wealth and income inequality, Europe must support Greece’s efforts” to loot the real European economies which create jobs and income.