• “I don’t understand! My caller ID said my own number was calling.” Mr. Santiago said. “When I answered, ‘Kestrel Finance’ tried to sell me South African gold.”
• “Synchrony Bank tried to collect a late payment on my mortgage,” Ms. Chan told me. “I don’t have a mortgage.”• “They called 12X today. They said I am eligible for a loan. I told them I didn’t want a loan and not to call back. After that call they continued to call 11 more times.” That was M. Girardot.
• “An IRS agent left a recorded message that the IRS was filing a lawsuit against me and this was my ‘final notice’,” Ms. Krieser wrote. “They didn’t leave a call back number.”
• “I was called from Norton Tech Support for a hacker issue on my PC and they wanted to fix my laptop remotely,” Mr. Baker said.
• “They said I had qualified for a $12,000 government grant and they ask me to send $250 to process the funds.” Ms. Darby reported. “They called me 12 times in three days but Bell Canada says the number is disconnected when I called back.”
• Ms. Gekko wrote, “Googling the number, I discovered that it is usually used by the collections department of Citi.”

“The federal Do Not Call list will put telemarketers out of business.” an unnamed Congresswoman told the nation some years ago. 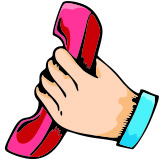 Maybe not so much. The Do Not Call list not only kept telemarketers in business, it gave the worst of them 217 million new phone numbers to troll. The legitimate marketers sort of comply with the law; everybody else ignores it.

Mr. Santiago and his compatriots are the lucky ones. They never connected to or they hung up on the bunch of crooks and hoaxes and scam artists. In those very real examples, the callers wanted to sell them something real or wanted to sell them a bill of goods.

And then there are the real crooks.

Vishing (“voice phishing”) is used to steal credit card numbers or other personal information from anyone who answers the phone.

• “He told me ‘You’ve won big money in a foreign lottery’,” Mr. Franks said. I sent him $350 by Western Union.
• The Shutoff Swindle: “She told me she was from FKEC [the South Puffin electric company],” Mr. Bennett said. “She said my service was about to be shut off because I hadn’t paid my bill. I told her I had but she said she couldn’t stop it unless I paid and I’d get a credit later if they figured it out. My CallerID had FKEC’s phone number so I knew it was them. I sent her $1,400 on a Green Dot card.”
• A stock scam usually starts off, “This investment is low risk. You’ll get a higher return than you can get anywhere else.”
• “I won a free big screen LED TV,” Ms. Wilson said. “They said they’d just put the shipping and handling charges on my credit card.”

Finally, “my former spouse does not, and never has had a Citi card,” Ms. Gekko wrote,

I first thought that Citi may have bought the debt, but I’ll bet it’s more nefarious. Debt collectors buy (and sometimes simply make up) old and expired debt for pennies or even fractional cents on the dollar. Then they throw harassing calls at it until the poor sucker gives in. And they often spoof the phone number and CallerID.

Too many neighbors reported to me that someone called them and

threatened to beat or smear them;
swore at them;
called repeatedly often without leaving a message;
claimed to be a cop;
lied about the amount owed;
claim that they would lock up the borrower;
tried to collect a debt no one owed;
tried to collect a time-barred debt
and so much more.

Time-barred debts and non-existent loans are the bread and butter of criminal collection agencies. These and hundreds of other fly-by-nights buy a list of “aged out” debts (or imaginary ones) for pennies or even fractional cents on the dollar and then do whatever it takes to collect. And when you pay them, they often don’t record it, simply selling your name to someone else.

I have a simple solution.

We have four lines coming in. Two once-upon-a-time landlines that are now Voice Over I.P. and two cell lines. That is, potentially, a lot of calls. Fortunately, they almost never all ring at once.

Oh, sure. If I feel like it and recognize your number, I may answer. If I don’t recognize the number, I guarantee it’s going to hear my witty, pithy, most excellent VMX message.

Happily, almost none of the spam/sham/scram calls leave messages.

Call blocking doesn’t work for new ones where you have to give them your phone number, though.