Genetically Modified apples that don’t brown are in the news this week. The Arctic Golden and Arctic Granny apples were created by Okanagan Specialty Fruits, a small company in Canada. The USDA approved them for U.S. consumers on Friday. 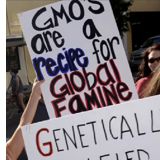 “The morons say GMO foods cause famine?” an incredulous Rufus said when we saw one on ABC News holding a sign.

Global Warming, measles, and GMO apples give us a good stepping stone to consider facts and truth and moronity.

GLOBAL WARMING
Political Assertion: “Man-made Global warming is making sea level rise.”
Fact: The Isthmus of Panama “recently” formed; that allowed armadillos to migrate from South America into North America by the early Pleistocene.
Fact: The Bering land bridge intermittently connected Asia with North America as sea levels rose and fell under the effect of ice ages; at one point that allowed early humans to migrate from South America into North America.
Truth: The climate does change over time but none of those huge changes had anything to do with humans. Only a moron could believe a politician can fix it with a tax.

GENETICALLY MODIFIED FOODS
Political Assertion: “GMO foods cause famine.”
Fact: Genetically modified wheat doubled yields in Mexico, India, and Pakistan and have saved over a billion people from starvation.
Fact: Modern corn (maize) began with a huge leap in genetic modification about 10,000 years ago when farmers in Mexico domesticated maize by choosing seeds because they came from taller plants or tasted better or were easier to grind. This selective breeding or artificial selection led directly to the corn we enjoy today. Modern genetic tools reduce the labor force needed to produce enough food for us and reduce the need for evil pesticides.
Truth: Politicians make stuff up. Morons believe them.

TRUTHS
• The solar deniers cult simply ignore the inconvenient truths that their computer models are flawed, that Michael Mann’s flawed hockey stick graph was never real science, and even that solar activity has some small teeny-tiny relationship to temperature here.

Whether climate change is man made or not has become a religious argument with the faith-based politicians who believe with all their hearts and none of their brains using the story to make money and that magic will keep their feet dry and their crops growing. The facts paint a different story.

The climate is always changing. The wise human will prepare for the change while the moron rails against the thermometer.

• The liberal left and the conservative right have joined forces under the anti-vaxer’s tinfoil hat of political science disease prevention.

Whether vaccine is good or bad has become a religious argument with the faith-based anti-vaxers political cult who believe with all their hearts and none of their brains that magic will keep them safe. The facts paint a different story.

Vaccination can prevent the once common diseases that ravaged us — polio, measles, diphtheria, whooping cough, rubella, mumps, tetanus, rotavirus and the flu. The wise human will protect him or herself while the moron rails against the needle.

Whether genetic mods are good or bad has become a religious argument with the faith-based politicians who believe with all their hearts and none of their brains trying ban all change and that magic will keep them fed. The facts paint a different story.

Foods evolve whether we do it in the field or the lab. The wise human will measure the impact of the change while the moron rails against the science.

So. Facts and truth and moronity.
The wise human observes a problem, gathers facts, has an idea, tests the idea, and draws a conclusion. The wise human tests that conclusion against any new data.
The moron hears a perfect idea on the Interwebs, finds a fact that confirms the idea, concludes it was a great idea and never ever needs changing, and then rails against the science that contradicts him or her.

And that’s the Truth!

3 thoughts on “And that’s the Truth! Pbbbbbbbbt!”