Regular readers will remember that Rufus says I am a “c-h-e-a-p   b-a-h-s-t-i-d” so I also think long about what most things cost before buying.

I’m not the first in the fambly to have that trait. My great grandfather was a Quaker farmer who never threw anything away which largely explains the size of the moving van we needed when we moved to North Puffin. I really believe in reduce, reuse, and eventually, recycle.

My mom coined the term “used food” when the grocery store would mark down the day old meats in the refrigerated meat case. We’ve expanded its meaning. 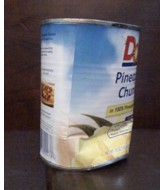 I see an upside down cake in my future.

SWMBO and I keep our own grocery bills as low as we can by shopping the used food store for dented cans. That emporium is a liquidation center that clears out “zoins” — the pallets of rejected non-perishables from grocery stores. My mom always worried that the dent could damage the can coating and at the very least change the taste of the contents. We’ve never had a problem.

There are some rules to follow with used food.

Bulging or bloated can?
What? Are you nuts? Cans bulge and bloat when bacteria outgasses.

Push on the top and bottom of the can
If the lid moves or pops, throw it out.

Rusted cans
Rust weakens the floor of Vermont cars and lets bad stuff in. Does the same for cans, doncha know.

Foods that have abnormal odors should not be eaten.

Lots of new laws went into effect in Vermont this summer.

I hadn’t realized just how just stupid Vermont lawmakers are. All food scraps must be recycled back into consumption by 2020. The best of my food scraps, after sitting on my summer porch, will help feed people, lawmakers say. Oh it’s good to be poor in Vermont.

Oh yeah, bags of trash cost an extra 25 cents to toss now, and bulk trash an extra $10 per ton. Canceling the fees for recycling is just the first step in an effort to keep everything that can be recycled or composted out of Vermont landfills by 2020, the goal of the state’s Universal Recycling law, Act 148. Mandated recyclables. (Sounds really good, except the trash haulers still pay for recyclables by weight.) Otter stuff. And this.

It is the policy of the state that food residuals collected under the requirements of this chapter shall be managed according to the following order of priority uses:
(1) Reduction of the amount generated at the source;
(2) Diversion for food consumption by humans;
(3) Diversion for agricultural use, including consumption by animals;
(4) Composting, land application, and digestion; and
(5) Energy recovery.

Back to the food on my porch. Our trash hauler retired (he didn’t want to buy a new truck to split recyclables) so we make a “dump run” every couple of weeks. In that time we fill two or three barrels with mixed recyclables and one large bag with household garbage. Uncooked chicken trimmins. The bones and skin of that small mouth bass. And the mouse I caught last Monday. Mmmm. Smells soooooo fine. Oh, my.

I may have to rethink this whole “used food” idea, though.