It was a rough winter in North Puffin. Fortunately, I was in South Puffin at the time. We had some plumbing issues. It turns out we also had a difficulty with the frig.

I have changed my spelling preference.
♦ The first citation of “frig” as short for refrigerator in the OED is from E. F. Spanner’s 1926 novel Broken Trident: “Best part of our stuff here is chilled, and with no ’frig plant working, the mercury will climb like a rocket.”
♦ The earliest “fridge” cite is from Frame-Up, a 1935 crime novel by Collin Brooks: “Do you mean that you keep a dead body in a fridge waiting for the right moment to bring her out?”
Hmmm.

The frig didn’t seem as cold as it should but our only freezer thermometer died in the freezer downstairs, so our first clue was that the milk seemed warm in the glass.

I’ve always resisted buying a refrigerator. We bought this more-than-20-years old frig because SWMBO wanted it, not because our previous white-box-that-makes-cold stopped making cold. It’s a really nice bottom freezer model with adjustable shelves and great access. It was the champ when it was young and had lots of fans. Unfortunately one of the fans has maybe gone on to love someone else. The white-box-that-makes-cold stopped pushing the cold into the box with the food in it.

I put some of the frozen canisters I use in my coolers in the frig and moved the ice cream to the otter freezer.

SWMBO and I both have wanted a French door, bottom freezer, frig. 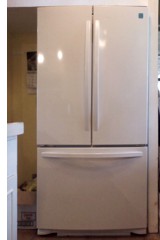 I agree wholeheartedly. I gave SWMBO the assignment. Check the sale fliers. Check the garage sales. Check craigislist. Find something we can afford.

She found one in the third listing. “Brand new Kenmore…” The asking price was about half the current sale price for that model. I was on the road 10 minutes later.

I don’t really think the young seller is in the Russian Mafia, but it is indeed a brand new frig, fresh off the truck, with original packing and wrapping and taping. SWMBO is quite pleased.

On the subject of tape, if there is an uptick in refrigerator sales, buy stock in tape companies. It took most of a day to find the seller, inspect and buy the frig, and install it. It took twice that to remove all the tape. I don’t think I actually removed all the tape.

We arranged to meet in a hotel parking lot because the seller wasn’t sure of his mother-in-law’s address where the frig was in the garage. We arrived at the hotel first to find a Vermont Law Enforcement convention but no seller. He eventually drove in (the truck he was going to bring it with wouldn’t start), sneezed on us, and lead us back north to his mother-in-law’s house at the exit just south of where we started.

My truck has a cap so we had to lay the new frig down in the bed. The widest door in the house is the front door to the great room. That’s the only possible entrance for a box that is 34″ deep and 36″ wide.

Step 1: Stand the new frig up on the front porch. Cover with blue tarp so it is invisible. Let it stay awhile to reacclimate to being vertical.

Step 2: Move old frig into the middle of the great room and plug it back in until the new one settles down.

Step 3: We renovated the kitchen a few years ago, including building an alcove for the 33″ wide old frig with a nice liquor cabinet beside it. The carpenter had buried the screws in the side of the liquor cabinet, kind of behind the 2″ butcher block top. I pulled the top, got to the screws, and pulled the cabinet. I put it in the garage — out of sight, out of mind. It won’t fit beside the new 36″ wide frig but it’s too nice to toss.

Step 4: When I say I covered a mouse hole in the wall behind the frig, I mean a MOUSE hole. About 4″ high and 12″ wide. I have a vague recollection that the carpenter punched that hole by drilling lots of holes around the perimeter, then punching it out so we’d have access for a water line if desired. It left something that really looked chewed. And I could be misremembering. I do not want to meet that mouse. I covered it with a piece of steel. Since I have now really annoyed it, I really really do not want to meet that mouse.

This is a story very much like the platform bed coming down the low clearance stairway in Jersey. The tape measure said it wouldn’t fit so we just didn’t tell the movers.

I removed the door handles (bad design: two different size allen wrenches required) from the new frig. Popped the great room and cellar doors off their hinges. Moved furniture. There was no wiggle room, even if the frig had been inclined to move sideways when wiggled. I put a plywood plate on my handtruck to distribute the load and used my truck loadbinders to strap the thing on. Used jail blankets to pad the box. Anne pushed. I pulled and balanced. And we got the thing in the door. After considerable jockeying, it landed in front of the alcove and slid right in as if made for it.

I did not break my hand. Anne did not get concussed. We had to put it down while it was still on the porch because we didn’t get lined up straight. She stopped it with her head. And putting it down next to the alcove, it caught my hand. No apparent damage to the frig.

Lo and behold, it ran like a new frig. Even the door alarm works, evidenced by how long we had it open while loading it. (Thankfully, that isn’t a siren call; it makes a steady ping-ping-ping, then the lights turned off.) There is both more and less room innit. I can put two gallons of milk and three 2-liter bottles in the door(s) but there isn’t as much room for butter or salad dressings because the door shelves aren’t adjustable height.

The worst part of having a new frig is the inconvenience of retraining. I have spent 20 years walking into the kitchen and opening the door by popping it on the edge. Now I have to pull a handle in the middle.

Step 7: Took the handles off the old frig and rolled it out onto the porch. Number One Daughter gave me instruction for that. “For the love of God, Pete and all that is Holy — please put the old fridge directly on the truck and take it to Hodgdons. Seriously, why touch something more than once — don’t move it from one place to another — JUST GET RID OF IT.”

Seriously, after we bounced it around the great room, the temp came down to normal. Maybe the mouse (remember the mouse?) had climbed in the air duct to build a home …

Writing the craigslist ad to sell it now.

A Southern friend pointed out to me that I overlooked a different solution: 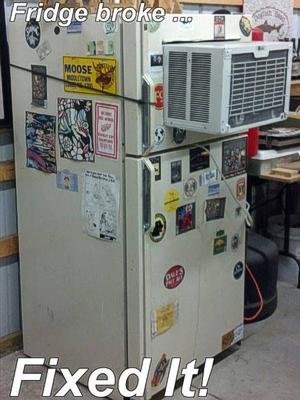