First rule of writing: write what you know.

I write a blog which means I do occasionally read OPB (Other People’s Blogs). And when I read, I often comment. 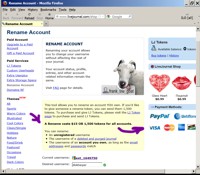 I seem to have a couple-three logins at different blogging softwares but they all come back to the gmail account associated with the No Puffin Perspective. They display my own name and everything, since I don’t snipe anonymously.

A friend sent me a link to a LiveJournal blog today. It started an interesting discussion about ownership and privilege; I logged in to make a comment. LiveJournal gave me a couple of options: LiveJournal itself, Facebook, Twitter, Openid, Google, MailRu, Vkontakte, or Anonymously. I won’t autolink my blogging to Facebook or Twitter because you never know what might end up tweeted on your wall. MailRu, founded by Yuri Milner, is the largest Internet company in the Russian-speaking world. I don’t speak Russian. Ditto for Vkontakte. I’ve never bothered to get an Openid because, well, I have gmail.

So I clicked the GooglePaw and gave LiveJournal my email address, fully expecting to see my name and the North Puffin avatar show up. I saw “ext_1649750” and a crash test dummy. 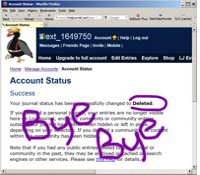 Went looking for a way to change the avatar. Did so.

Google Plus now probably has a low res bird on my page instead of my smiling mug.

Went looking for a way to change the user name. And that’s where the story gets interesting. LiveJournal is perfectly happy to change my public name from what they assigned to what every other account uses. For $15.

I have a better idea.

I deleted my LiveJournal account and I recommend everyone else do the same.