I had a blissfully hot shower this morning. I closed the bathroom door and kept all that hot, moist air inside. Ahhh.

Winter has come to South Puffin.

Wind chill advisories went up on Saturday night for “feels like” temps of 28-32°F. In South Florida. 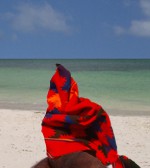 That was up in the United States so it never actually dropped that low here. But it has been that windy. I put the blanket on the bed Saturday night and laid out my flannel shirt for Sunday.

Most houses in the Keys don’t have central heat so when the outside temperature drops, the inside temp follows. Up to North Puffin it was 9° Sunday morning and partly cloudy with a 30% chance of snow, although all the snow on the radar was over New Hampshire and Maine. The forecast 19° high temp there was not a warming trend.

It was 52° here after a couple hours of solar heating and the Wind Advisory stayed in effect for winds from the North at 15-25 mph with gusts to 35-40. Same 10° thermometer climb here Sunday as up north. We went all the way to 63°.

We broke our fast at the Cracked Conch. The old fogies who gather there on Sunday mornings always take over the “Crank Corner,” a counter out on the deck.

Everybody moved inside. The Conch doesn’t have air conditioning but they do have windows. All the windows were shut. And, it turns out, they have heat which was turned on!

I spent the day yesterday in the living room, reading and poking the ‘puter. Having the patio stone1 in my actual lap was quite nice. I did cover my feet with a blanket although the temp rose to 56° outside and 60°(!) on the porch.

My next door neighbor has company. They had all the doors open there when he got up yesterday morning; he was seriously cold. He complained a bit about that when he came over to warm up. “I’ll do outside when it drops to 70°,” he said. “I don’t do 68°!”

It got even colder overnight. I woke sometime in the darkest hours and thought about getting up for the second blankie. I didn’t because it was all the way at the other end of the house. I guess I didn’t need it but it surely was cold this morning. 60° here in the sunroom first thing. It was 54° and mostly clear when I arose at sunrise. We’re allegedly headed for a high of 70° but with a windchill as low as about 45° on breezes from the NNE at 20-25 mph. 16 mph “breeze” right now.

I don’t understand why my friends in North Puffin aren’t more sympathetic.

1Patio Stone: Liz Arden’s pet name for my 26 pound square, black, laptop with its 17″ screen. It puts out a fair dinkum amount of heat.