Rufus likes to remind folks that I am pugnaciously parsimonious. He’s right; in fact, I coined the term and live it daily. I even considered pitching a magazine column with that name but didn’t. See, there are simply too many other skinflints out there writing about it.

Still, cheap bahstidry is a valuable trait but there is thrift and there is cheap.

I mentioned to Liz Arden that I would have to break down and buy some real Febreze this morning as I was cleaning my shower. Washcloths take on a life of their own here on my subtropical island. Oh we have a lovely breeze coming through the house but [things] grow when the temperature is 81° and the dew point is 82°.

I need something to take the stink out of the washcloths. The unbranded stuff just doesn’t stand up to whatever comes in on that breeze.

There’s some truth to that.

The Super Strength Dollar Store de-stinkifier bottle lists water, odor neutralizers, quality control agents, and perfume on its label. I’m down with water as the principle ingredient. After all, gasoline is a lot more expensive and harder to transport. Perfume is another goodie and if they used gasoline instead of water they’d need a lot more perfume which would seriously annoy my nose.

The real questions are what do they think are odor neutralizers and how did they shrink the SCUBA gear down so small that the quality control agents can swim in the spray bottle?

As a corollary, do I have to feed them when the bottle is empty? 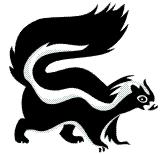 Odor neutralizing is the right approach.

In 1993, Paul Krebaum published a recipe in Chemical and Engineering News for a mixture that neutralizes the sweet smell of skunk. Mr. Krebaum, a chemist at Molex, used his extensive experience with thiols (the chemicals that make eau de skunk and rotting fish smell so wonderful to dogs) to discover that an easy way to neutralize the thiols is to induce them to combine with oxygen.

Mr. Krebaum’s skunk remedy works. On skunk smells. It doesn’t work on mildew. And neither do the “odor neutralizers” in the Dollar Store goop.

“Febreze is [another] cauldron of chemicals,” according to the Environmental Working Group website.

“Febreze Air Effects is showcased as the ultimate odor eliminator, with magical fairy powers. In fact, it’s represented as the one product in all of existence that will get you to breathe happily, as if it were happy pills in aerosol form … as if it were health food in a spray … even an organic cleaning product that works like a magic wand.”

I like magical fairy powers. One of the Interweb writers I admire called himself the Good Fairy in the Gay Nineties. His words had the power to make us laugh, to make us cry. I don’t know if he could get the smell out of my washcloths, though.

The snake oil doesn’t work and Febreze costs more than new washcloths, so the tightfisted among us will look to Google for substitutes. The frugal sites all have variations of this FakeFebreze recipe:

Oh, swell. I’ll have very soft, flammable, musty washcloths. See, the alkaline sodium bicarbonate (baking soda) can absorb and neutralize some acid but mildew can survive within a pH range of 4.0-9.0. Straight baking soda has a pH of 9. It just gets friendlier to mildews as it gets wetter and the fabric softener makes them smell good. Probably tastes good, too.

Back to the (real) Febreze. The important issue I see is that the active ingredient is Hydroxypropyl beta-cyclodextrin or HPßCD. P&G claims that these molecules bind the hydrocarbons, retaining malodorous molecules like putting them in handcuffs, which “reduces” their release into the air and thus the perception of their scent. It’s better than the perfume that merely masks the odor but the odor is still there. Waiting. With the handcuff key out.

That’s still like painting a skunked dog with expensive tomato juice. I want some inexpensive chemistry that actually eliminates the odor.

2 thoughts on “Better Living through Chemistry™”