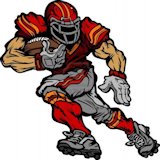 CBS has scheduled 60 Minutes not even to start until 8 p.m. here in the eastern time zones tonight. The Texans and the Patriots started duking it out in Boston at 4 and no one figures that game will end early.

I’m thinking even Presidential addresses wait until football is over. In fact, the Super Bowl is on the calendar on February 3. Rep. Boehner (R-OH) invited the President to deliver the State of the Union on February 5. The NFL figures even triple overtime with commercial breaks won’t go quite that long.