AAA predicts that 43.6 million Americans will travel 50 miles or more from home during the holiday weekend. That’s up about 1% over the 43.3 million who traveled last year, mostly because of “lower gas prices.” This is the fourth consecutive year for holiday travel growth since 2008, when Thanksgiving travel plummeted 25% as the economy tanked. Nationally, 90% of travelers will take to the road rather than fly, up about half a percent.

The Associated Press says “filling up the tank will take less money than people expected” when AAA conducted the survey early last month “because of a dramatic drop in gas prices.”

Ben Franklin thought the turkey should be America’s bird so I’m thankful to have found a big inflatable turkey in a local yard for this week. The real Thanksgiving column is here. 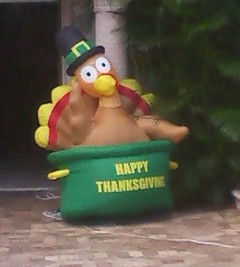 We are staying put for the day but I am thankful that we have friends coming from afar. Joe will join us. He lives next door. Ed says he is very, very hungry. He lives across the street.

2 thoughts on “Giving Thanks”