!@#$%^&^ COMCAST BILLED ME FOR THAT SERVICE CALL LAST MONTH.

And then I got the doomsday letter.

“XFINITY is coming. Soon you’ll enjoy TV, Internet anc Voice service made possible by Comcast’s upgrade to an all-digital platform … equipment may be required to receive ALL channels.“ 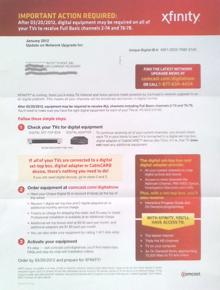 The !@#$%^ Comcast office was crowded and had just two reps manning the counter. When I got to the counter, I told the rep that all I have are channels 3-20 and asked if I needed a converter or if the most basic basic channels would remain analog. The rep said I needed it. Then I asked about changing channels.

“No. How do I change stations when I’m recording with a VCR,” I told her. “Say I want to record channel 7 at eight o’clock, change to channel 10 at nine, and channel 4 at ten?”

“Let me get you a service technician.”

He told me that wasn’t possible but, he said, I didn’t really need the converter because channels 1-26 weren’t scheduled to go digital.

Cool. I almost left right then but the rep contradicted him.

“All the channels will switch March 15,” she said.

Swell. Now I have three digital boxes that give me less service than my zero current digital boxes since THEY CANNOT BE PROGRAMMED TO CHANGE THE CHANNEL.

Yes, I am shouting.

And it took more than an hour to get them.

I get to pay more per month for less service. And that’s the story of dealing with !@#$%^ Comcast.

On the other hand, I met the man who owns the DC-3 in Marathon and I bought a yellow croton, so the day wasn’t a total loss.