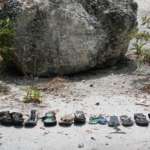 Suppose you have seven shoes lined up in front of your rock. Anne gives you four of my shoes because she is tired of tripping over them. How far south is your rock?

The Guinness record holding online international mathematics competition had 1,204,766 participants in 56,082 schools in 235 countries last year. The original World Math Day was held on the March 14 (Pi Day) but has moved to the first Wednesday in March except it is on Tuesday this year. No wonder math is so confusing.

Students from across the world have 48 hours to compete in 20 games in each of five levels. (Quick! How many games is that?) Students have only 60 seconds to complete each game. (Quick! How many minutes do half the games take?)

I’m thinking you need to know math just to keep track of the answers. And the contestants. In fact, I’m thinking you need a computer. After all, World Math Day would not be possible without computers and the Internet to pair off more than a million competitors and track their results in real time.

The abacus, built by Egyptian mathematicians in 2000 BC, was in widespread use centuries before we even started writing numbers down, let alone before we started formally counting by tens. Merchants, traders and clerks in Africa, Asia, and around the world still use it.

And so we learned very early to make change.

Time passed. Math needs multiplied. Edmund Gunter invented the slide rule around 1620 so engineers could figure out how much a church roof rafter would bend. The slide rule can be faster at multiplication and division, and often is faster for roots, logarithms and trigonometry than a calculator, but it doesn’t add or subtract very easily which makes it not nearly as useful as an abacus as tax time draws near. I was in the last class at Stevens Institute required to buy a slide rule.

Blaise Pascal invented the first mechanical calculator about 20 years after Gunter made his slipstick but IBM waited until 1954 to demonstrate the first all-transistor model. Their first commercial unit, the IBM 608, cost about $80,000.

Scott Flansburg serves as the Ambassador for World Maths Day and is known as “the human calculator” because he can run the numbers faster than an electronic calculator can. Mr. Flansburg visited All Angels Academy students in Miami Springs a couple of weeks ago. He was there to energize students as they prepare for the contest. This is the second year students from the school will participate in this event.

Kids need to be better at math than I am. After all, there are more numbers now.

I have an undergrad degree in math and science as well as one in mechanical engineering but in real life I combine pursuits like this — writing and photography — with consulting to other small businesses. I don’t engineer stuff every day but I do use math. Every day. I use it to calculate my change at Wally World faster than the cash register. I use it to determine how many network cables I need to set up a client’s new computer system. And the programmers I hire used it to make sure these words I type appear on my screen and, shortly, on yours. Every kid today will use more math in his or her lifetime than you or I have.

For the record, I still have my slide rule. I also have a solar powered Casio full scientific calculator, a lot smaller than their first all-electric “compact” calculator of 1957. My handheld cost $10.

Both my slide rule and my solar calculator require light to work. Mr. Flansburg can work in the dark.

Tomorrow is also Town Meeting Day in most of Vermont. Anne who is a Justice of the Peace (and election official) will be counting shoes (and noses) again. I hope she won’t be counting in the dark.