Chuck Todd asked Rep. John Lewis (D-GA) on Meet the Press if he plans to forge a relationship with Mr. Trump. The congressional icon said Mr. Trump makes that difficult. “I don’t see this president-elect as a legitimate president.”

Don’t get me wrong. Rep. Lewis was as good a guy as any politician gets. Oh, sure, he’s traded on race and civil rights leadership all of his life but we’ve come to accept that from our pols. More than the Nashville sit-ins, more than SNCC, even more than the Freedom rides, Mr. Lewis has associated himself with the Voting Rights Act.

Rep. John Lewis wants to delegitimize 46% of the American electorate and 57% of the Electoral College.

Lyndon Johnson signed the Voting Rights Act into law on August 6, 1965 to overcome legal barriers at the state and local levels that prevented black Americans from voting but the landmark legislation does more than prohibiting racial discrimination in voting. It assures that citizens can vote no matter their race, color, or language minority status. Mr. Lewis was not a lawmaker at that time although he was present when the VRA was signed.

And now Mr. Lewis wants trade on his reputation as a standard bearer of voting rights to delegitimize 46% of the American electorate and 57% of the Electoral College.

“I don’t see this president-elect as a legitimate president.”

It doesn’t matter what you (or I) think of Mr. Trump’s behavior or his ability or his class. He traded on his own history, followed the rules, and won the election. Mr. Lewis traded on the Civil Rights movement history, broke the rules, and lost his own validity. 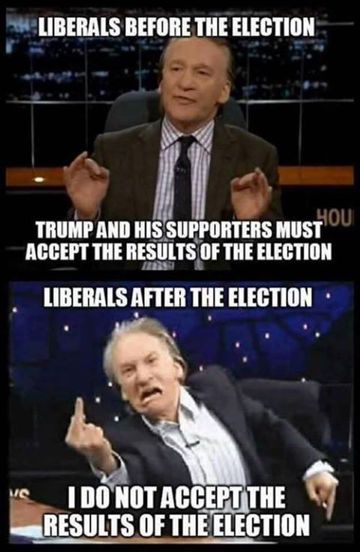 And now President Trump is about as legitimized as it gets.