The Student Government Association ran a Black Lives Matter flag up the University of Vermont flagpole on Thursday. Not everyone is saluting. Flags representing other groups have flown from the same flagpole.

A number of dissenters think “All Lives Matter” in ultra-diverse Vermont and especially should at our public ivy. 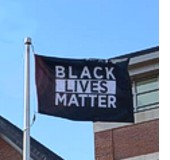 “Establishing a diverse and inclusive culture is a priority at the University of Vermont. In fact, UVM holds that diversity and academic excellence are inseparable.”

But only black lives matter.

“The #BlackLivesMatter flag that was casted on UVM’s campus yesterday makes me proud to be a Catamount.” Cassidy Derda (@m1ss5cass) tweeted Friday.

“The University of Vermont is a place to learn and to teach. It is not a cloister — it does not live in a vacuum. It is both in the world and of the world. Its mission is to educate people for leadership in society.”

But in the UVM society only black lives matter.

Or do they? Really?

“My body filled with lots of joy to know that my predominantly white university is paying tribute to the deaths in the black community,” student Akilah Ho-Young posted on Facebook. Turns out that I’m not black, my voice doesn’t matter.

Black lives do matter, but those raising flag do so to shut down discussion.

“Sometimes it does,” Liz Arden said. “Often it’s done to raise awareness of the injustice perpetrated by ‘roidal cops and others.”

That’s what all the protesters, including those at UVM, would have us believe. The effects are different.

I have no problems with pointing out injustice but, sadly, the we-need-to-protest-the-injustice people have been co-opted by the KILL THE COPS! people. Here, for example, the Black Lives Matter “protesters” chant “Pigs in a blanket, fry ’em like bacon!”

“I’ve seen statistics like those,” Ms. Arden said. “Poor people are easy prey. Poor people in reach of criminals are even easier prey. So it’s not surprising.”

But the welfare state keeps people in poverty so that’s not the solution and in the meantime, cops have to respond to the crimes that have been committed and the big news is that black on black murder is about five times more likely than white on white. Where do you think crime prevention efforts should go?

I wonder if students could fly the Tea Party banner there or raise the flag for “Illegal means Against the Law” or for “Christians Have Religious Freedom, too.”

6 thoughts on “Lives Matter? Really? Are You Sure?”