My folks never needed to wait for Labor Day to take a road trip. I was not born in the back seat of a 1940 Buick but I might have been if my dad hadn’t gotten a job the week before. [From Road Trip 2013] 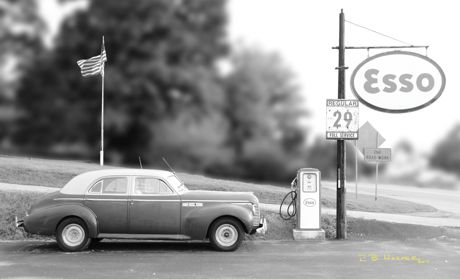 Rufus sent me an advertisement flogging the five most awesome American roads to drive. I wrote about it then and it’s time to revisit it now.

See, I have a new truck, a tankful of gas, and a desire to leave North Puffin before it gets really cold and not get to South Puffin until it cools off. And until Colonial gets the pipeline fixed. The North Carolina price gouging law has taken effect. It doesn’t help.

“We’ve seen fuel disruptions like this before and want to reassure people that there’s no need for alarm at this time,” said NC Public Safety Secretary Frank Perry.

I’m plotting a road trip for October. I have a yearning for the blue routes: diagonally down toward the Southwest on the outbound leg and then along the southern border to home.

You may recall my obsession with the Not So PTT. “I can fit SWMBO and everything I have to carry and even an RV-size washer-dryer into a cargo trailer. There’s room for the three-esses, room to cook, room to sleep, room to poke a ‘puter,” I wrote. “There is not room to change your mind.”

Good sense prevailed. I was well aware that this $5-10,000 solution would cost me twice as much in twice as much gas as just driving, all so I can save $30-40/night on motel rooms and sleep in a Walmart parking lot for free! That and the couple year build time meant I couldn’t have it ready to leave in a couple of weeks.

Since I decided against the cargo-trailer-cum-camper, I’ll couch surf with friends if I can find any and otherwise hit the Motel 4-1/2s along the way. It’s sort of the 5,000 mile long way around from North to South Puffin.

Hint to old friends and friends I don’t know yet: if you recognize any of the places on my route, I’m open to suggestions for anything from a quick beer to a free night on your couch. I am (mostly) housebroken.

I’d like to see the USS Cod submarine and the Statue of the Flying Housewife and maybe take an Airstream Factory Tour and, of course, see the happy Blue Whale of Route 66. As usual, I’ll try not to go too many places I’ve been before.

Having said I won’t go anywhere I have been, I’ll make my first stop in Bethlehem, Pennsylvania because my Aunt Dot who turns 96 this year lives there. She and my folks met when they all lived in an apartment house in Philly before I was born; I spent time every summer with her boys in Annapolis and they with me.

I’ve discovered that a number of US cities that have state names. I’ll have to miss Wyoming, Minnesota, or Minnesota, California and Google has never heard of California, Georgia, but I put California, Pennsylvania on the list first and I might make it through Kansas, Vermont, and Georgia, Kansas, outside Wichita, as well as Vermont, Indiana, just before I get to Kokomo which I want to visit because I like the name. I’ll probably miss Indiana, Pennsylvania, but I might make it through Pennsylvania, Alabama on my way back. Sadly, I can’t get to Alabama, New York but I’ve been in Florida, New York, and I’ll try to find New York, Florida, but Florida, Ohio, is also probably too far north of my route. On the other hand Ohio, Texas, is a possibility but Texas, Maryland, will have to wait until I come back north. Maryland, Louisiana, is sort of on the way from Shreveport but I could see going through Louisiana, Missouri.

I may have to leave the Police Museum and the USS Cod for another trip because Cleveland may be too far north. Jackson Center for the Airstream Factory Tours is a bit north of my route, too, if I want to see the Statue of the Flying Housewife in Columbus. Dayton, where my Aunt Betty lived, has the Carousel of Inventions.

It’s a couple of hours out of my way but I’ll probably head up to West Lafayette, Indiana, to see where my cousin and his family hang their hats. I won’t stop in Huntington, though, because I don’t know anyone at Shuttleworth Conveyors there anymore. It would be good to stop in Brazil because there are no mosquitoes and get fired up over St. Elmo, Illinois, because how could I not?

Can you drive a truck through the St Louis arch?

I’ll more or less follow the Mother Road from there.

The Mark Twain National Forest has 1.5 million acres of beautiful public land with sections of the Ozark Trail and the historic Greer Roller Mill. Maybe I’ll get the lead out in Joplin, Missouri and I have to stop in the railroad town of Chandler, Oklahoma, simply because my grandmother was a Chandler.

Amarillo calls me because it was the “Helium Capital of the World” and that is lighter than air. That city has one of the largest meat packing plants in the United States, right next to the only nuclear weapons assembly and disassembly facility in the country. (Really, it’s the Cadillac Ranch that I want to see.)

I definitely want to see the new Eagle Aviary in Window Rock and float around that part of New Mexico and Arizona (Tsé Bii’ Ndzisgaii, or valley of the rocks) that includes the area surrounding Monument Valley Navajo Tribal Park, the Navajo Nation equivalent to a national park where my mom painted.

The westward leg will end in Paradise Valley.

I’ll rest out there before heading east along the southern border; that’s a story for our next installment.

It will be good to get away from the idlers and imbeciles running toward November 8.