My friends Jon and Pamela Friar were holding forth over dinner about how much safer we would be if we didn’t have “automatic assault weapons.”

“I don’t know much about guns,” Jon said, “but we need to control automatic weapons better.” Jon is a science guy, pro-choice, and very data driven in the rest of his life, so I wondered why he isn’t fact driven in this discussion.

“Oh, but we are. Everything I’ve ever read shows how dangerous the choices we’ve made are.”

And yet, with everything they’ve read, they don’t know any facts.

“I don’t know much about guns,” he said. 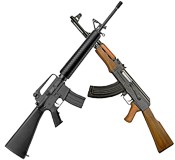 The AR-15 was designed by Armalite to meet the US Army requirement for a new rifle, chambered for a new intermediate cartridge. It was adopted by the US Army as the M16 and became a standard issue infantry weapon. It cycles by “direct gas impingement” that it differs from earlier gas systems and initially fired a .223 Remington/5.56×45mm slug. AR-15 offerings for the civilian market are different. The civilian AR-15 started with Colt’s original semi-automatic “Sporter” rifles, manufactured since 1963. All the current clones are still simply semi-automatic rifles that look like the original AR-15. Semi-automatic rifles are not select fire / burst or full automatic capable.

The legendary AK-47 is also a selective-fire, military rifle. It was developed in the Soviet Union by Mikhail Kalashnikov in the last year of World War II. It is gas-operated and fires a 7.62×39mm slug. The Kalashnikov and its variants are the most widely used military rifles in the world. Civilian models are available from China, (East) Germany, Egypt, Hungary, Iraq, Poland, Romania, Yugoslavia, and even Russia in semiauto only. Century International Arms, founded in St. Albans, Vermont, is a major importer and remanufacturer AK-style rifles for the civilian market.

Unless those rifles are illegally altered, they are not full automatics. Full auto weapons have been regulated since the National Firearms Act of 1934, the Gun Control Act of 1968, and the Hughes Amendment in 1986.

They don’t know the .223 is one of the most common cartridges in use here for varmint rifles as well as semi-automatic rifles such as Ruger Mini-14/5P.

Every one of those rifles has plenty of killing power. The “assault rifles” just look fiercer. So do modern pickup trucks (which kill more people).

The real question here is this: since the “assault weapon” you abhor is similar (and in many ways less capable than many popular hunting-style rifles, don’t you really just want to ban all American citizens from owning all guns?

Jon and Pam spent most of his working in the middle east where ISIS is now a government. I’m not sure how they feel about taking away the weapons from “rebels” in Syria, Iraq, and other countries there who are fighting that “government” for their freedom and very lives.

The tree of liberty must be refreshed from time to time with the blood of patriots and tyrants. It is its natural manure.
–Thomas Jefferson in a 1787 letter to William Stephens Smith

Jon and Pam believe a few citizens cannot defeat a modern army or secret police force. They didn’t know that the history of rebellions against tyranny has always featured a ragtag bunch of citizens going up against a superior government force. The British host, f’rex, was undefeated until they met the fighting farmers of the Colonies and we know how that turned out. The ragtag rebels may not always win but, if they didn’t try, we surely lose.

I wonder how Jon and Pam figure it’s good for the citizens there with sticks and stones to go up against the well-armed, well trained ISIS fighters but bad to take that right away from citizens here.

Oh. I understand. They know our government will protect us from … oh wait.

2 thoughts on “Just the Facts”