My Saturday was going really well until I realized it’s Monday.

Halloween is far enough past that it is (probably) safe to relate the tale of the “outhouse races” up here in farming country. Oh, we’ve had indoor plumbing as long as anyone (you may recall my Day of Poop two summers ago) so we all pretend that only our cows go in the barn. My friends Jim and Fred Baillargeon have a 200-head dairy farm up near the border in North Puffin. They have a two-holer about 40 steps off the back porch, not too far from the the calf sheds and on the other side of the manure digester.

Great sport as the temperature drops on Mischief Night is not cow tipping but outhouse tipping. 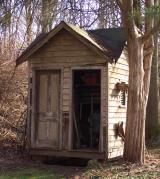 Outhouse tipping has some rules. The most important is to tip the outhouse onto its door. See, that way the tippee has no way out other than through the small hole in what has become the sidewall of a very low room. And the pit is now a viable moat to cross.

The tippee is usually annoyed.

Extra points for a two-holer. Year-long bragging rights for a doubly occupied two-holer.

See, most folks retain an outhouse because that chance to be alone with ones thoughts and a good book is almost the best part of a day on the farm. When Jim and Fred both have to go, though, it was either a race or a building project. They chose to build.

Unfortunately, Jim and Fred both had to go around midnight on Mischief Night. They knew better but sometimes the urge is just too great. The high school football team had hosted a fundraising dinner that very evening in an effort to keep the pranksters tied up for a good cause. Nobody thought twice when the menu had Boston Baked Beans. Lots of beans. A troop of commandos went over to the farm and lay in wait in the calf shed for the inevitable. I don’t know Jim and Fred didn’t hear the giggling over the calves bawling but they both went quietly to their fate.

The boys didn’t know that Jim had loaded his bird gun with rock salt and Fred had a pair of million candlepower torches. The boys gave them a minute to get settled and ran out.

Outhouses are strong little buildings and weighted at the bottom. This tipping op turned out to be harder than expected. Finally, it started rocking and went over. The left tackle’s foot slipped and he almost fell in the hole when Fred lit ’em up. Jim took careful aim and…

Let’s just say the latrine wasn’t the only slippery place on the farm.

They discussed constructing a manure digester near the St. Albans Bay. St. Albans Town has about 10,000 cows. That’s a fair dinkum lot of manure.

GMP is Vermont’s heaviest investor in alternate energy and, since they need to make a profit with it, they aren’t just flinging poo at the wall.

The front end of a digester is in essence a cow-power septic tank. A large concrete holding tank collects the manure. The tank sits at 101°F for 21 days while methane gas rises naturally to the top. A collection system syphons off the biogas fuel which feeds a natural gas engine, which in turn spins an electric generator to create electricity. The electricity goes onto the GMP grid.

Nothing goes to waste. The tank empties into a separator to divide out the liquids from the solids. The liquids get spread or, better, injected as fertilizer. The solids can be composted into soil amendments or can be used as bedding for the cows.

I think my friend Bill Rowell built the first digester in Franklin County (Foster Brothers Farm in Middlebury has had an active digester since 1982, the first in Vermont).

GMP has at least 13 farms in the program; this would be the fifth digester on farms in Franklin County. The others are in Bakersfield, Berkshire, St. Albans Town, and Sheldon.

Farm digester projects in Vermont tap a utility-funded grant program created by the settlement when Entergy Nuclear bought the Vermont Yankee nuclear power plant. The Renewable Development Fund started in 2004; it provides technical assistance funds for digester projects. Cow Power program customers can also opt in to pay a premium of $.04/kWh on renewably-produced power. Green Mountain Power pays farms that same premium for each kilowatt hour they deliver to the grid. By the end of 2012, energy produced by the farms exceeded demand by 35%.

So our poop not only don’t smell, it glows in the dark!