You can’t tax people into eating kale. Except in Vermont.

Members of the Vermont House Ways and Means Committee are ready bring out H.235, a controversial bill to levy an excise tax of two cents on every ounce of sugared beverage distributed in the state. Sodas. Fruit drinks. Sports drinks. Flavored water. Energy drinks. Iced teas. And probably the orange juice I drink every morning. In short, any nonalcoholic beverage, carbonated or noncarbonated, that is intended for human consumption in Vermont. The bill won support in the Health Care Committee on Thursday.

The excise tax would be charged to the retail stores who would turn around and raise the price on the shelf. It’s a tax that would generate about $30 million in revenue per year for Vermont

Vermonters are debating what a sugar-sweetened-beverage tax would do. The consensus appears split between two choices:

(a) Merely increase sales of sugar-sweetened kale chips; or
(a) Drive sweet-toothed residents across state lines to New Hampshire where there is no sales tax or New York where not long ago, huge 17-ounce beverage cups were banned. And there are a lot of taxes.

Nobody surveyed thought it would change behaviors.

A bottle of fruit juice with some added sugar costs about 66 cents or 3/$2. That fruit juice would jump to about 86 cents with the tax, Vermont Retail and Grocers Association president Jim Harrison said. In some cases, the cost of your favorite fizzy beverage would about double. 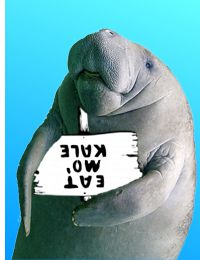 “There is no doubt their real reason is the $30 million,” my red-haired friend Caitlin Abbate said. “Bye bye BOGO.”

They’re both right. Two cents is about the retail price per ounce of a 2-liter bottle of Pepsi™ or Coke™ which tells me the members of the state Ways and Means Committee aren’t interested in fixing obesity in the state. They’re interested in the $30 million in new annual revenue. And, since sin taxes never drop (consider the taxes on cigarettes, whiskey, gasoline, and oregano), we can expect a can of pop to cost about the same as a pack of smokes in a year or two.

Even Florida’s manatees have taken up the cause. I reckon someone convinced them it will mean more free lettuce for them.

I filed a FOIA request and found a Vermont lobbying permit granted to the BORECOLE Corporation. Ban Or Eliminate Costly Oversight for Lettuce Eaters is a Florida corporation headquartered in Manatee County.

“The cost of a beverage would nearly double…”

I was able to speak to Josiah (not his real name) Bartlett about their lobbying efforts. “We believe in obesity and in re-education,” he said. “People need to be taught to consume kale-based foods in order to reduce the demands on lettuce.”

To that end, a pilot plant is already up and running right on the river in Bradenton where the first Kaola Pop is on trucks waiting for delivery. Kaola Pop is a kale-based cola with no high fructose or any other corn syrup, added sugars, honey, agave nectar, or even beet juice. It has no sweetening at all, just the natural goodness of Kale.

A spokesman for U.S. Sugar in Clewiston, Florida, welcomed Kaola Pop to the market.

“Manatees are so stupid,” Marie Antoinette said some years ago. “Let them eat kale.”