“The lady doth protest too much, methinks.”

Shakespear and others of that time knew that the word “protest” meant to “vow” or “declare solemnly.” Gertrude thought the Player Queen went a little over the top with her promises. Taking the modern approach, I think the Player Queen got a little skewed with her mission.

Tens of thousands of protesters swarmed Washington yesterday because a black kid got shot running from a crime.

Some pundits believe as I do that it’s time for the Civil Rights movement to grow up, take responsibility, and forge ahead.

Are there some bad cops? Sure. There are about 15,000 law enforcement agencies in the United States with more than 750,000 sworn officers. That many people means there are some bad actors but the data shows that police officers commit very few crimes relative to the population they swear to protect.

The question you have to ask yourself is, who should get most of your attention? The few bad cops or the 1,163,146 criminals? 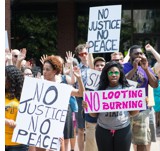 Who is the actual pig in this story?

Some pundits believe as I do that it’s time to stop letting old demagogues like Al Sharpton and Jesse Jackson blame everyone but the criminals for all the crimes. It’s time for the Civil Rights movement to grow up, take responsibility, and forge ahead.

We’ve all seen the current crop of protest signs. I like my signs better.

4 thoughts on “Protest Too Much”