[please note that the title has nothing gekko’s porcine potluck provisioning poast.]

Neighbors shot it out in Liberty City yesterday. Again. A 3-year old girl was caught in the crossfire. The shooting started as a dispute between neighbors when bullets started flying. She was outside playing with her brother and friends when she was hit. Cops and paramedics rushed in. The little girl will be OK.

That’s just another day in the life of a police officer. It might have included a traffic stop (will they shoot me or spit on me?), a crash with injuries (will an innocent die?), a next of kin notification (how can they do that?), a burglary (is there a perp with a gun in the house?), a mob of looters (is that a brick or a stolen radio or a ham sandwich?), or a shoot out in Liberty City.

All of those incidents are adrenalin-rich but they may feel less dangerous than walking down the street to the cop on the beat who knows there could be a sniper in a shelter or a bomber with a backpack or a criminal on crank increasing his pressure on the trigger right now.

“This is a posting from someone who lives in Vermont just five minutes from my house. For the purposes of this lesson, I removed the identity of the owner of the post; however, I was able to see the post without ‘friending’ him.

“The anger is real and it is on our doorstep. As the wife of a police officer, these are troubling times. Simply being a police officer makes a person ‘guilty by association.’

“We need to stand up for our police officers. I’m ready for a picket line in support of our officers. It’s about time.

I’d walk that line, too, but it will take more than that. See, this isn’t the first time — even in Vermont — for some nincompoop to put a target on the men and women who serve. 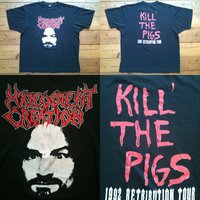 In this case, our Vermont poster could well be the idiot offspring of a 60s flower child who chanted the title phrase in San Francisco before moving east.

Those seminal protesters weren’t so original after all. Cecil Adams at
StraightDope tell us, “If you thought the term pig arose in the 1960s, you’re in for a surprise.

“The OED cites an 1811 reference to a ‘pig’ as a Bow Street Runner–the early police force, named after the location of their headquarters, before Sir Robert Peel and the Metropolitan Police Force. Before that, the term ‘pig’ had been used as early as the mid-1500s to refer to a person who is heartily disliked.”

Did you ever wonder why that cop looked you over — twice — when you walked past?

Did you ever wonder if it were the fact that cultured, ivy league you just screamed “Kill the pigs” and he wondered whether you meant to do it right now?

I don’t wonder about how we raise protesters. This country was founded by protesters.

I do wonder how we raise people who can praise burning down their town, praise looting my store, and praise murdering all the cops all while they condemn a cop for killing a likely lawbreaker.

Who will save your butt:
Remember that the “talk down, not take down” proponents are the ones who run away from the flying bullets and that police officers run toward them.

5 thoughts on “Kill the Pigs”