I had all the windows and doors open on Friday, for the last time in 2014. Funny how I used to like the seasonal changes.

We moved to Vermont to get away from what I always called “Philly winter.” That was the season of slush and freezing rain.

Oh it did snow there in my corner of southeastern Pennsylvania, a lot sometimes, but interwoven with the times we skied or tobogganed down Turtleback, the big hill in the pasture that led down to Russell Jones’ pond, were the weeks of sorry slush soaking our boots and the ice to chip off the stone path. That part of the world gets only 27 inches of snow in an average year.

I thought more snow (and less slush) would be a good thing. Silly me.

The first, in 1950s Pennsylvania, closed Shiloh Road. I’ve never understood why the road builders did what they did but they made this story possible. See, our house sat on a broad, sloping lawn and was probably 35 feet in elevation above the main road. Our driveway sloped down to Shiloh which rose sharply to meet it, then cut a straight-and-narrow path deeply through the field to the Hays family home, the next house a quarter mile up the road. The banks of this cut touched the edge of the pavement. The banks were nearly vertical and 10-12 feet tall.

The snow blew straight across our field for what I remember as days and days and days but it was probably just a couple of and days. Not much had a chance to build up on that reach of pasture but It surely liked to nestle into the gorge.

The Township plow truck couldn’t make a dent in it.

The state plow truck couldn’t make a dent in it.

The front end loader couldn’t make a dent in it.

They’d all spend hours revving engines and gnashing gears but there was no place to put the snow.

That snow-filled gorge was no more than a quarter mile long but it was 10-12 feet deep and packed in tight by gravity, wind, and the attacking plow trucks.

A couple of the other troublemakers, my dad, and I all figured this was a pretty good excuse to practice engineering techniques. We tunneled it. We built fort walls. My mom made a lot of tomato soup and grilled a lot of sandwiches for us.

It took 10 days, but the state eventually trucked in the biggest snowblower I have seen to this day. It had a maw taller than my dad and enough diesel horsepower to throw the snow halfway across the field. It still took a couple of days to clear out the gorge.

The second great snow came to Vermont. It fell a day or two before we flew up on a house hunting trip in what should have been the early spring of 1978. We didn’t have a bit of trouble with snow on the roads — even then Vermont seemed to have a “clear road” policy. But a police officer in Alburgh did.

My enduring memories of that trip are the kids’ first flight in a private jet (the company I worked for had a Beechcraft King Air turboprop) and the sight of a police car.

We’ve all had the experience of seeing a police car zooming up behind us, light bar a-flashing. Drivers tense up a little. Passengers start chattering. Some people hunch down in their seats. Everybody looks straight ahead.

This particular police car was buried in fresh snow up to its roof with just the “bubble” showing. I thought the officer should have lit it up so the plow trucks didn’t clip him.

The cloudier part of the year begins around October 4. Vermont averages an inch in May and October, and 102 inches for the year.

It snowed here in North Puffin yesterday. It’s only October and it snowed. The TV weather guy even showed photos. Me and my bare feet are heading for South Puffin, you betcha. 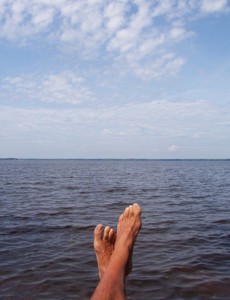