We need a Language Cop.

I may not mean what you think.

OxfordDictionaries.com revels in the language trends behind its latest update to the English lexicon.

• acquihire n: buying out a company primarily for the skills and expertise of its staff 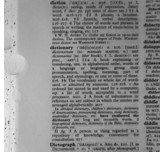 • binge-watch v: watch multiple episodes of a TV show, one right after the other
• clickbait n: content whose main purpose is to draw visitors to this web page
• cord cutting n: practice of cancelling a cable or satellite subscription or landline phone
• geocache n: Since my kids have been geocaching for so long, it surprises me this didn’t make the list years ago
• humblebrag n & v: (make) an ostensibly modest or self-deprecating statement whose actual purpose is to draw attention to something of which one is proud
• listicle n: an Internet article presented in the form of a numbered or bullet-pointed list
• octocopter n: I want one
• side boob n: I like them
• time-poor adj.: spending much of one’s time working or occupied; I’ve always liked the term “land-poor” for families with more grass than cash
• vape v: drag on an e-cig.

I’ll post and tweet some clickbait to this listicle. Two other words in this sentence made earlier Oxford lists.

English may be the greatest language ever.

Nobody ever said it was easy to be great.

• Where else would we find homonyms, homophones, homographs, and heteronyms?

It was a fair day when I went to the country fair to pay the fare for a pair of pears. Fortunately I did not tear the bag which might have caused me to tear up.

• Our resourceful language borrows most every word you or I speak from some other language and prodigiously lends many of them back.

The band played guitars, a mandolin, fiddle, banjo, and bass at the Summer Sounds concert yesterday. Guitar comes to us from the Arabic qi-ta-ra or qai-thara which originally descended from the ancient Greek kithara. A bass is not a fish when it has strings. There were no hazards at the concert other than the threat of rain. Unlike the linguists in France, we can borrow hazard from the medieval French hasart.

We need a Language Cop. We need to keep the languages of our settlers old and new alive but we also need to assure we can talk to each other. Ket, the language spoken in Central Siberia, is vital. Abenaki is a small but significant member the Algonquian languages of northeastern North America. Zazaki is an indispensable Indo-European language spoken primarily in eastern Turkey by the Zaza people.

I love that some of our words come from Ket, and Abenaki, and Zazaki.

I see red every time I hear “Press 1 for Ket” from a telephone system.

The best way to do that is for us all to learn English, too.

That’s the key. English is the greatest language ever simply because it remains so common, so accessible, so complete.

We do need a Language Cop. We need a Language Cop who will arrest the phony Liberals who insist on shackling the Siberians and earlier Americans and Iranians and Spanish and Tag-A-Log speakers so they can’t speak with each other.

3 thoughts on “I Made a Little Listicle”