I attended an Inclusive League baseball game on Saturday.

Because all North Puffin children are equally good players, tall and strong, the kids from 6-17 all play hardball together in Inclusive League games. Baseball is a great game, especially here where our League team started up just a couple of years ago. The kids have uniforms, thanks to a Town grant, and a new regulation field next to the hockey rink.

I don’t usually go to games or even watch baseball on TV but I like the game. My dad and I listened to Birds games when we were on the boat. I even attended a Diamondbacks game a couple of years ago. I loved the Ken Burns series but I had mostly stopped watching games back when my friend Jon Matlack was pitching for the Mets. He won a lot of games, but he never won any when I watched. Since pro ball is steeped in superstition, I quit watching and he started winning again. You’re welcome, Jon. Still, Google delivered 1,080,000 results about “baseball musings” in .34 seconds. 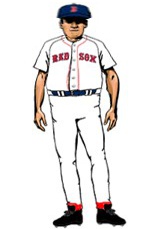 We were there because Bobby, my friend Lido “Lee” Bruhl’s grandson, was starting in his first game as shortstop for the North Puffin Red Sox which is named for the Boston team. There are no Yankees fans in North Puffin.

Bobby is a great kid but he’s not a very good athlete. He is a little overweight and a little under-coordinated and is often not quite sure how his feet fit. Pretty much the same as 90% of the kids I know.

His mom is an elementary school educator and knows that Bobby’s self-esteem is his armor against the challenges of the world and she knows, absolutely knows that the way to improve his self-esteem is to praise his every activity.

“I teach compassion. Feeling good about yourself is crucial to every other facet of life,” she said.

Bobby had four at bats. He whiffed all three times his first time at the plate.

“Good job, Bobby,” his mom called from the fence line.

Second at bat. He got just little piece of the ball almost by accident and sent a little dribbler back toward the mound. Bobby isn’t a very fast runner and was maybe half way down the base line when the pitcher drilled the ball over to first.

“Great job, Bobby,” his mom called from the fence line.

Third at bat. Bobby asked me not to write about that one.

The first pitch kind of meandered toward the plate. Swing and a miss. Strike one.

The second throw got away from the pitcher and was high and outside. Ball one.

The third pitch really got away and was high and way outside. The opponents had a terrific catcher. Ball two.

Bobby has trouble with fast balls. Inclusive League pitchers aren’t supposed to throw curves; parents of young pitchers have decried curveballs because contorting elbows that way strains the young joint more than arms can handle. It turns out that a major study showed curveballs pose no greater risk to young arms and elbows than any other pitches. In fact, several other studies say the real problem is throwing too many pitches of any kind, not just curveballs.

The pitcher felt confident. He had been practicing his curve and knew he could get Bobby to chase it. Except the ball didn’t get anywhere near the plate and Bobby wasn’t ready anyway. Ball three.

This was the eighth inning. The Red Sox were down one with runners on first and third.

Bobby stood there, waiting. He was calm, his bat on his shoulder.

Final pitch. Fastball right down the middle. It was a perfect pitch. Bobby reared up and swung for the stars. And missed the ball by about a foot. Strike three.

“You did terrific, Bobby,” his mom called from the fence line.

Kids understand a lot more than adults give them credit for. A kid knows, for example, when he or she excels in a sport. And when he or she sucks at it.

When I was a kid, if I struck out or just dribbled the ball down to the pitcher, some coach would have taken me aside and show me how to hit a little better. Then he’d make me drop and give him 20 and spend an extra half hour in the batter’s cage. I could never have hit one of Matlack’s fastballs, but I did learn to do a lot of pushups. And once I grew into my feet, I diverted my desire to be a jock into swimming and racing cars, instead of sports where I might be adequate but never good.

I don’t understand why Liberals like Bobby’s mom insist on making cynics of Bobby and all the rest of our children.

4 thoughts on “The Perfect Game”