Want to know why I distrust our liberal friends?

They drive how science goes wrong.

I started this three-part series with the simple question, “If you distrust what the Administration told you about the military, why do you trust what they say about global warming?” 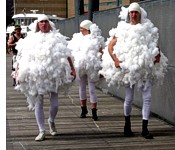 Trust but Verify
That “simple idea underpins science” but Ronald Reagan gave it a bad name among our Liberal friends who say “the science is settled.”

See the summary of responses above.

Let’s look at the 97% agreement on human caused global warming and the IPCC.

John Cook published a paper in Skeptical Science that claims he and others reviewed nearly 12,000 abstracts of studies published in the peer-reviewed climate literature. They found that “97 percent of the papers” that expressed a position on anthropogenic global warming “endorsed the consensus position that humans are causing global warming.”

Our liberal friends latched onto that one, you betcha.

It turns out he was not alone.

The Economist reports that “modern scientists are doing too much trusting and not enough verifying — to the detriment of the whole of science, and of humanity” — and they are doing it in fields from biotechnology and rust to, yes, “global warming.”

And finally, for those who pray at the institutionalized ignorance altar to Al Gore, there may be a scientific consensus on global warming after all. Only 36 percent of geoscientists and engineers believe that humans have created global warming, although I suspect 100 percent of them believe humans have created the crisis itself. Of course, this finding was in the peer-reviewed Organization Studies, so it must be suspect, yes?

There is good news: The Economist also reports, “The most enlightened journals are already becoming less averse to humdrum papers. Some government funding agencies, including America’s National Institutes of Health, which dish out $30 billion on research each year, are working out how best to encourage replication.” [Emphasis added]