Today is the day.

Although 64% of individual tax returns filed electronically this year were done by tax professionals (as of April 2), the total number of electronically filed, self-prepared returns was up 6.7%. More than 36 million people used tax software this year.

E-filed returns account for about 80% of individual tax returns filed. 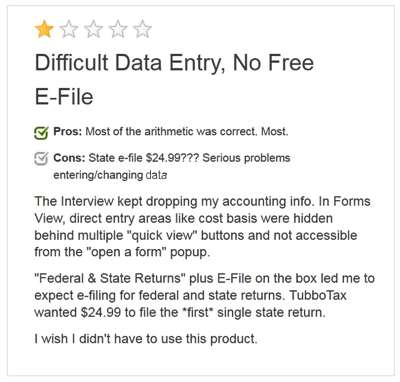 I started tax prep in January this year, since I have to report sales tax then. It gave me a nice jump on louts like Rufus who hope the post office will stay open until midnight.

There were a couple of glitches.

They did eventually give her a new login so we discovered they had addressed her W2 to the street address of her former (and now defunct) employer, not to her home. That was useful.

She called to get a “corrected” W2.

“Oh, you don’t need that,” the State of Vermont Payroll Division rep told her. “The IRS won’t look at that.”

It looked as if we’d gotten everything straightened out until I discovered that there was no longer a mortgage interest deduction on Anne’s return and that !@#$%^ Tubbo had “forgotten” some of the personal info checkboxes. She has claimed that mortgage interest on every return we’ve used !@#$%^ Tubbo. The 1098 for the bank was right there in the Forms. Blank. It wouldn’t let her enter the interest until she created a new 1099.

I found the most recent round of errors by going line by line through the tax return PDFs rather than through the pages in !@#$%^ Tubbo. It’s easier in !@#$%^ Tubbo because I can quick link to other pages but I keep discovering that what it shows me on screen may not match what it prints. The PDF does.

I was taking a “last look” at my tax return when I wondered about something I simply had not noticed before: a data error in a 1099.

I looked up the proper numbers and overrode the Tubbo values.

There is no easy way to correct imported data because the “forms view” doesn’t have a copy of the 1099 it came from. I found it by going back through the “interview” and correcting it there. That’s when !@#$%^ Tubbo decided my income was $1,203,147.14. Ya know, if I had made a million bucks, I’d pay the tax in a heartbeat and retire.

I did eventually find a hidden link to the right data entry point.

Then we tried to e-file.

Worked great for the federal return, sort of.

The “Congratulations! Your Returns Have Been Sent! (Your current e-file status is pending)” emails did drift in but I had to go to IRS.gov to be sure the IRS had accepted them.

And e-filing didn’t work for SWMBO’s state return. Seeing “Federal State Returns” plus “E-File” in bold letters on the box led me to expect I could e-file our Federal and State returns.

She has printed and mailed her Vermont return, complete with a printout of the W2 the State of Vermont sent to the wrong address.

Tax Freedom Day is not until April 21, three days than last year.

We have a voluntary tax system. It’s the law that people pay, but the government doesn’t calculate it for you.

Not until after you file, anyway.

2 thoughts on “Why I Hate Tubbo”