My friend Nola “Fanny” Guay is ticked off this morning. Someone sent her this poster by email: 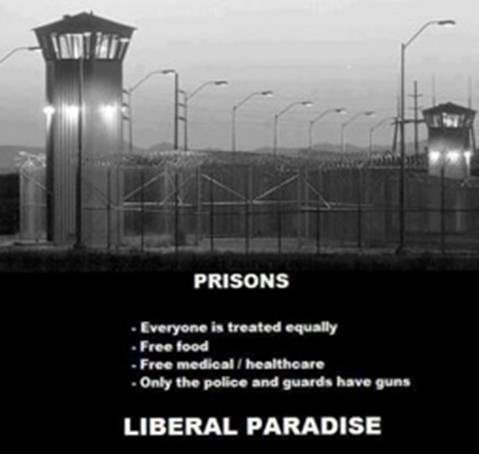 “I hate it when people send stuff like this around that just isn’t true,” she said.

Especially when the truth is worse.

No liberal really wants to put the rest of us in jail. Not really. Not even the farthest green protester whose mantra is that the Earth would be sooooo much better without humans.

The poster should read,

“Projects — The Liberal Paradise.“
A little history of public housing in the United States: The first “model tenements” begin to appear in the Cobble Hill neighborhood of Brooklyn in the 1870s. Alfred Tredway White, a great believer in progressive reform efforts, built a series of buildings for the people known in the nineteenth century as the “deserving poor.”

The working poor, those hardworking people who couldn’t make enough to live in the nineteenth century were called the deserving poor.

Those first public housing residents were carefully screened. Only employed families with two parents were allowed. Alcoholics and those with social problems were banned.

There were other similar efforts but Franklin Delano Roosevelt introduced the first permanent, federally funded housing in the United States. His 1933 New Deal program, the National Industrial Recovery Act, directed the Public Works Administration to undertake the “construction, reconstruction, alteration, or repair under public regulation or control of low-cost housing and slum-clearance projects…” Liberal program.

Harry Truman’s Fair Deal dramatically expanded the role of the federal government in public and private housing with the Housing Act of 1949. Liberal program.

All the discontent with “Urban Renewal” led to Lyndon Johnson’s Housing and Urban Development Act of 1965. Liberal program.

Now that I’ve done my Liberal pounding for the day, it is worth noting that the Conservative Banker approach to public housing is simpler: “indenture ’em with a mortgage.”

Join us next week when we wonder why under Obamacare (“Free healthcare is to be available to everyone”), a Key West family with insurance received two denial letters this past week for their 2-year old son’s Lymphoma treatment.

7 thoughts on “Jail – the Liberal Paradise?”