I tweeted Leaving the land of $3.94 gas! Woot & Heeeeeeyyyyyyyyyooooooooo! on Thursday as I drove over the bridge into Vermont from New York State.

Bob and his friend Brad created the tradition of shouting Heeeeeeyyyyyyyyyooooooooo at the top of their lungs on road trips. They started it the first time they drove to the Winter Star Party in the Keys as “a cry of exaltation as each state line was passed.” Usually they are in closed cars, so it hurts only them. I have to admit that I expanded into yelling into everyone’s ears via social media. 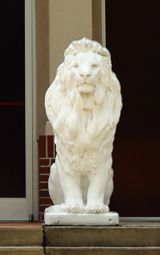 Road trips are cool. Where else would I get my car detialed (that’s fonetic pronounsation) or discover that Woodstock has a brand new water tower. I shouted it for Georgia, South Carolina, North Carolina, Virginia, and West BG Virginia. 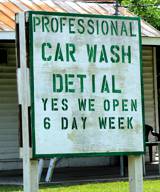 My GPS is schizophrenic. It told me I was in Pennsyltucky.

This was a visit-old-friends-and-shoot-photos trip. The Laurel Grove Cemetary and the Forsythe fountain. Robertville and Estill which may be pronounced E-stull. Harper’s Ferry. I stopped at a couple of beaches at the Delaware Water Gap and even waded in the river to take some bridge photos. I didn’t take (many) pictures of the friends.

The run along the Delaware Water Gap was nice although the overcast means the photos I shot there were fairly dull. I’ll still get a couple out of that series.

The rest of the trip was boring except for the rain. There were some serious deluges through which I flat out could not see. I need new wiper inserts — they are pretty worn and I had to push the stiffener down into the arm again when I stopped at lunch time. Can’t find refills anywhere so I guess I’ll end up buying complete new wiper blades. That irritates me.

That’s price gouging. Sen. Bernard Sanders (I-VT) got his sound bite about gouging last year, though, so we don’t have to worry about that any more. See, after he “launched an investigation into unusually high gasoline prices in northwestern Vermont last summer, gas prices in Chittenden, Franklin and Grand Isle Counties became much more competitive.”

Of course that lasted about a nanosecond after the TV cameras (and Sen. Sanders) went elsewhere.

Our neighbor, Captain Gib, sells gas at his country store. He was moaning the other day that he “only makes about four cents a gallon.” For the record, each gallon of gas sold in northwestern Vermont last year made the seller 31.6 cents in average profit; this region turned in the 10th highest profit margin in the U.S. which means I really, really don’t want to drive in the number one market.

Meanwhile, I have to mount the mower deck on the tractor and do the first cutting (the grass is more than a foot tall). There are some other chores waiting on me. Two toilets need repair parts and the hot water pipe to the upstairs bath burst over the winter. That made a mess. I have to bleed the air out and refill the furnace with water and anti-freeze. Memorial Day Weekend. It snowed a little just a few miles from here.

I didn’t drive over to see, though. Gas is even more expensive today. And the diesel juice for my tractor is even worse.

Did I mention that this column is about price gouging?