Liz Arden and I were talking about dog food this morning. She looks for a brand that has plenty of meat and meat by-products, eschews vege loading, doesn’t disgust the human eye or nose, and isn’t “gourmet” priced. Our mutts dined on fresh-frozen horsemeat that we bought in little waxed-cardboard takeout cartons but you can’t hardly find that any more.

That got me going on chain store brands. I have a Kirkland blue oxford cloth dress shirt that fits well, drapes nicely, has decent stitching, and has a nice hand. Come to think of it, I have a couple of shirts from Wal-Mart that fit the same bill. I might not choose one to impress a client but I would certainly wear them with a tie to go to work.

If I wore ties.

Everybody hates Wal-Mart, though.

And the top reason:

A Vermont Environmental Court decision granted Wal-Mart Stores, Inc., permission to build a 147,000-square-foot store in Puffin County. The decision requires Wally to pay the Town additional “public service costs” (such as for fire and police) that its presence cause the Town to incur. 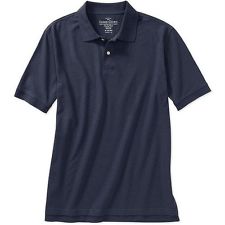 The decision is not without precedent in that municipalities often charge developers impact fees before allowing them to build houses and stores.

On the other hand, here comes Wal-Mart, a business that will pay property taxes year in and year out to underwrite public service costs such as the fire and police departments and the schools and the Town gets to charge them extra year after year for the increase in police and fire costs.

Heck, I think as long as we’re putting our hand in their pockets, we should get them to pay extra for satisfying a demand for three ring binders in our schools.

For the record, the friendly, local hardware stores either affiliated with the national chains like Ace or True Value or they disappeared, but that happened in the 70s.

I have a different reason not to like Wal-Mart: “Faded Glory.”

Like most large retail and grocery chains, Wal-Mart offers private label store brands, commonly referred to as house brands or generic brands, which consumers expect to be low-priced alternatives to name brand products.

“Faded Glory” is Wal-Mart’s house brand for basic men’s, women’s, and children’s clothing and footwear. It is the store’s primary clothing brand.

Why on Earth would a major chain want its primary customers to think they are fading off to nothingness.

Unless the glory of Sam Walton’s dream has indeed faded.