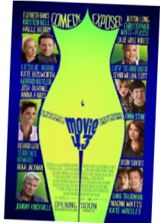 Warning. Once you’ve seen this, you can’t unsee it.

You may have seen the world premiere of the film’s PG trailer on Tosh.0. He gave his audience the first link for the real trailer (caution, YouTube will make you sign in to see it). That led to some 4 million views. Spike plastered the arena at a live mixed-martial arts fight with pictures. MTV is running a “Balls Out Uncensored Weekend Sweepstakes.”

It’s not the first time. Viacom’s Paramount Vantage unit paved the way with 2010’s Luke Wilson movie Middle Men. The ads then and now weren’t just those flashing banners to drag your attention away from the regular content. These commercials are full trailers and more.

Probably shouldn’t search for the trailer from the office although “searching for the trailer and this just, um, popped up” strikes me as a unique and fully excusable reason to visit a steamy site.

1 thought on “Bringing the (Movie) Audience to Attention”