In a recent Comcast commercial from the Martin Agency, Dennis Farina looks straight at the camera and says “Xfinity has the fastest Internet and CenturyLink doesn’t.”


I had a little trouble with some downloads around the time the commercial aired. Many small podcasts took many big minutes. Skype kept telling us the connection was too slow for video (Skype asked if I had checked my dial-up service).

The following chart shows how long a file the size of that short podcast should take at advertised speeds. My !@#$%^ Comcast connection averaged 8 minutes.

I ran an independent speed test.

Comcast provides a speed test that shows download speed, upload speed, and ping time. The Interweb fora are filled with reports that the Comcast results are, ah, less reliable than other testers.

(Just so’s you know, I showed the SPEEDTEST.NET results to a Comcast rep who said they were wrong, that I needed to use Comcast’s own servers to get a “valid” result.)

Alrighty then. Here are some more of !@#$%^ Comcast’s own servers, starting with the same date and time of the test above.

I understand what !@#$%^ Comcast does but did they have to make Dennis Farina do it for them?

For the record, it took only about 2.6 minutes for Mr. Farinas 30-second spot to load and play over my fastest-in-the-nation Xfinity connection. 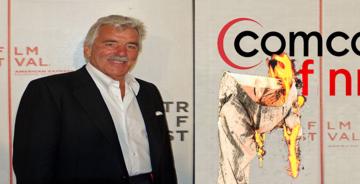