I picked up an empty Blueberry-Pomegranate Blast by Colt 45 can on walkies this morning.

I walk a couple of miles each morning at a reasonably brisk rate. I’m still not getting my heart rate up high enough but I do get my resps up. Sometimes I talk on the phone while walking which surprises the bridge fishermen I pass. Sometimes Jody Beauregard walks with me. Jody is a couple inches taller than I am, but he doesn’t like to walk as fast. “You ought to slow down and smell the roses,” he keeps telling me.

But this is about beer cans, not Rosaceae. Nor the original lime juice. 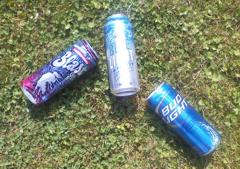 Vermont passed its Beverage Container Law to “reduce litter, increase recycling, reduce waste disposal costs, create local jobs and save energy.” Save energy? The legislature enacted the law in 1972 but delayed implementation until 1973.

I’m thinking that was to give our shopping cart people time to get bigger bags and carts.

The Act covers beer, malt, carbonated soft drinks, mixed wine drinks, and liquor in any glass, metal, paper, plastic or combination bottle, can, jar or carton. We pay 15¢ for liquor bottles and a nickle for everything else. The redemption rate overall is 85%. The Baptists should have such good statistics.

Michigan’s 10¢ bottle bill has a 96.9% recycle rate. Florida is studying the idea.

The Blueberry-Pomegranate <shudder> Blast comes 23.5 ounces to the can. 12% alcohol. Still only a nickle deposit back, though.

That doesn’t make up for inflation. Gas prices went up a nickle on Friday alone here in the protected pocket with the highest gas prices in New England. That price hike comes in the face of dropping prices everywhere else in the nation, and in spite of calls for a Congressional investigation.

I found a single 24-ish ounce empty can each morning last week and I figure this is a bad sign.

“We need to start a petition drive,” Jody said. “If people would just drink two 12-ounce cans in their cars instead of these 24-ounce monsters, their beer wouldn’t go flat as fast and we’d make more money.”

I picked up just a nickle each day. I could have been making a dime.

2 thoughts on “Two Nickles to Rub Together”