“Wow! It is without any doubt the law now,” my friend Nola Guay crowed. “And there is nothing, absolutely nothing, in it that I don’t like!”

Two days from our celebration of Independence from a monarchy, how about the facts that it is yet another tax, that it will continue to drive up the cost of seeing your doctor, and that the Regent of Pennsylvania Avenue just stole yet another piece of your heritage?

But Mr. Obama says he gave you something good!

She sent me a poster of the Obamacare Top 10. 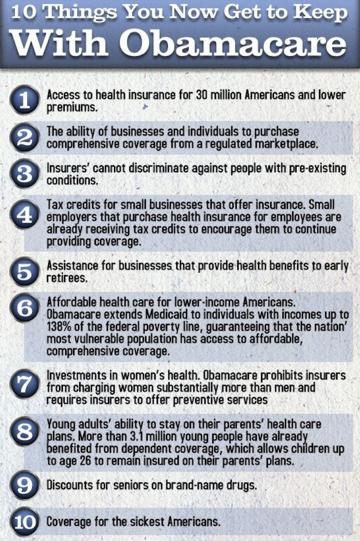 Here’s What Obamacare Actually Does For You:

“and lower premiums.”
Your insurance premiums have doubled in the last 10 years. They’ve continued to go up because many Obamacare provisions don’t take effect until after the election or 2014.

The problem isn’t higher premiums. The problem is the high cost of our medical system. Work on cost and I guarantee premiums can come down.

(2) “The ability of business and individuals to purchase comprehensive coverage from a regulated marketplace.”
Wow. I guess the Banking and Insurance industry wasn’t already regulated. Now it will be more regulated. Like Cable TV is. That’s gonna make it better.

(3) “Insurers’ [sic] cannot discriminate against people with pre-existing conditions.”
Um, anybody remember ERISA? Been there, done that.

(4) “Tax credits for small businesses that offer insurance.”
Oh, goody. We’ll raise taxes on all the rich small businessmen and businesswomen to come up with the money to give them tax credits back.

(5) “Assistance for businesses that provide health benefits to early retirees.”
See above. And don’t forget that “early retirees” doesn’t mean thee and me. It means the United Auto Workers who get to retire with full benefits and the GM stock Mr. Obama stole from the other retirees like thee and me who used to own that company.

(6) “Affordable health care for lower-income Americans. Obamacare extends Medicaid to individuals with incomes up to 138% of the federal poverty line.”
No new taxes, though. This won’t hurt a bit. You might feel a little pinch…

(7) “Investments in women’s health. Obamacare prohibits insurers from charging women substantially more than men …”
Oh, goody again. So Obamacare singlehandedly disallows the actuarial tables insurers live by. Or men, who cannot have children, get to pay a higher premium than they would under actuarial calculations. And old peeps. And children. All higher premiums.

(8) “Young adults’ ability to stay on their parents’ health care plans.”
That’s a good one. Didn’t need 2,700 pages to do that. Speaker of the House John Boehner mentioned yesterday that the insurance companies themselves lobbied for it because federal law kept them from allowing dependents to stay, well, dependent past their high school or college years.

See, young adults are generally healthier than older adults. That should improve the revenue the insurance plans generate.

(9) “Discounts for seniors on brand-name drugs.”
Oh, swell. The home of the $6,000 hammer will negotiate the cost of your Viagra.

Wait. That’s not right. Don’t the drugs we want fall into the “donut hole”? (That’s the difference between the initial coverage limit and the catastrophic coverage threshold currently in the Medicare Part D prescription drug program. This Administration loves donuts. One box of Munchkins coming up for your med-surg snack. Mmmm, donuts.)

My friend Rufus had non-Hodgkin’s Lymphoma in 2011. My mom’s breast cancer metastasized in 2001. Oddly, both of them were pretty darned sick. Both of them had coverage, Rufus on a company retirement benefit and Mom on Medicare and Medicare Part B.

That was before Obamacare.

So tell me again, other than nationalizing the payment system for health care (and running up the costs), What Obamacare Actually Does For US? ‘Cause I just don’t see it.

Next week, we look at the squadron of opossums in Ninja outfits who raided my trash can and laid the blame on the raccoons.