Which may be little different than “peed on.” AT&T said it will buy T-Mobile from Deutsche Telekom. The $39 billion cash-and-stock deal would make T the largest cellphone company in the U.S.

I don’t much care. I went back to the dark side last month.

In the interest of full disclosure, I do hold AT&T and Verizon Wireless stock, some of which I inherited and some I bought myself.

Despite that, I was a semi-loyal T-Mobiley customer ever since the lovely Layla sold me a RAZR with a promise of a $50 rebate at a home show a couple-three years ago. See, AT&T had no presence in Vermont (or many, many, many other places) and I had had bad experiences with Verizon. 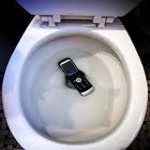 Of course, I’ve had bad experiences with T-Mobiley, too, starting with the fact that they charged me twice for the RAZR and ending with them trying to charge me twice for my last month of service.

That hasn’t been the only issue.

Both AT&T and T-Mobile use “GSM” to broadcast your conversation. That’s good for the merger. So does Canada’s Rogers Wireless. That’s not. In fact, the Global System for Mobile Communications is the world’s most popular standard for mobile telephone systems with about 80% of the global market. Subscribers on GSM-based networks can use their phones pretty much anywhere in the world, including Canada. For a slight additional roaming fee.

Up here next to the longest unprotected border in the world, T-Mobiley and AT&T users routinely find themselves roaming onto Rogers. That Canadian service often overruns the weaker T-Mobile or Cell-One signal in North Puffin. I often did the cellphone dance in the driveway here because one can’t make cell calls on that service from inside the house. And the dance was sometimes with an alien.

The first time that happened, T-Mobile charged me International fees. I protested. They showed me how to set the phone to select only the specific local carrier and gave me a refund.

The second time it happened, T-Mobile charged me International fees. I protested. I told them I had already set the phone to select only the specific local carrier. They shrugged.

The third time it happened, I knew not to make a call. I still dope-slapped them. I told them I had already set the phone to select only the specific local carrier. They shrugged.

After that, I stopped trying to make calls from my driveway.

T-Mobile recently started getting smart when it detected my RAZR was saying “eh?” to the Canadian towers. They sent me text messages (on the International roaming rates) to tell me I might incur extra charges.

Uh huh. Verizon uses CDMA, a different standard for mobile telephone systems. I haven’t seen the Rogers towers on my cell display since I switched. And I can make calls from inside the house now.

“AT&T is already a giant in the wireless marketplace, where customers routinely complain about hidden charges and other anticonsumer practices,” Parul P. Desai, policy counsel for Consumers Union, told the NY Times. “From a consumer’s perspective, it’s difficult to come up with any justification or benefits from letting AT&T swallow up one of its few major competitors.”

For the record, T-Mobile and AT&T aren’t the only ones with what we’ll call “billing issues.” Regular readers may recall that I needed a phone timer to record my Verizon landline calls because their local usage bills never once came within 10% of the total shown in the log. Not once. My previous experience with Verizon Wireless was exactly the same.

From this consumer’s perspective, I don’t expect to see much change. Prices will go up. Customer service will go down. But hey! You T-Mobiley folks will get the iPhone!

3 thoughts on “Teed Off”