Want to know everything that is wrong with schools today?

About a century ago in news biz terms, on the Fifth of May of this year, Miguel Rodriguez, an assistant school principal at Live Oak High School in Santa Clara, CA, punished five sophomores for wearing the American flag on their t-shirts. He deemed their shirts conspicuously “incendiary” mostly because other students were wearing the red, white, and green of the Mexican flag that day.

A lot longer ago than the Santa Clara wardrobe malfunction, the assistant principal of our local high school did the same thing to our daughter. We had taken our kids on their first trip to Key West shortly after we bought this house in South Puffin. The Half Shell Raw Bar is one of the favorite tourist stops there. It inhabits a building that was once a Key West shrimp packing building in the historic seaport.

The Half Shell sells t-shirts.

You know the story. “Our ‘rents went on vacation and all I got was this stupid shirt.” 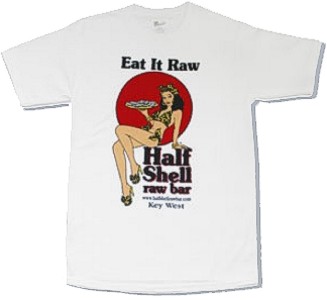 Number One daughter really liked her shirt with its nubile, bikini-clad waitress, platter of oysters, and slogan. Particularly the slogan.

Naturally, her Assistant Principal went after that shirt with tar and bonfire. Number One daughter wasn’t even allowed to turn it inside out. That insidious, salacious message was still there, still capable of corrupting those innocent 1980s high schoolers. She had to call home, get a ride home, and change clothes. The school banned her from classes until she did.

The holiday of Cinco de Mayo, the 5th of May, is not, as Assistant Principal Rodriguez and many other people apparently think, Mexico’s Independence Day. South of the Border, Independence Day is September 16. Here’s the history: Mexico was a debtor nation when, in 1861, then-Mexican President Benito Juarez stopped paying the interest on the loans. France held a lot of the notes, so they sent in their debt collectors in the form of the French army to force payment of this debt. The regional holiday of Puebla commemorates the victory of the Mexican militia over the French army at The Battle of Puebla in 1862.

So Live Oak High School wanted to punish five kids for not celebrating a battle over a loan default.

Never occurred to Assistant Principal Rodriguez (a professional educator) that the right principle would have been to let the kids duke it out, send them to separate corners, and use the whole experience as a teaching moment, eh?

Back to kids eating dirt.

The United States maintains a fiction that we want well educated kids. We bandy about buzz words like “experiential learning,” “critical thinking,” and “expanding horizons” while we isolate the kids from the ebb and flow of playground confrontation, intelligent decision making, or anything that might impact their self esteem. And gawd help us if we expose them to germs.

Ofttimes kids learn better when we let them be kids. That includes having the odd playground discussion over political values and eating a bit of dirt in the playground along the way.

7 thoughts on “Let Them Eat Dirt”