I took some time off from worrying about the claim that women’s hot flashes are responsible for Global Warming to reminisce about the years I raced “pony cars” in sports car races in the 1970s.

It is very hot in a race car cockpit.

Many think that the pony cars started life when Ford launched the Mustang — the nearly eponymous name came from the ‘Stang — in 1964 but the real start of the breed was the popular and sporty Corvair Monza from Chevrolet. The cars were (and are again) compact, stylish, affordable, and sporty.

The Sports Car Club of America (SCCA), first and foremost a sanctioning body for automobile racing, created amateur and professional racing classes for pony cars in 1966. Amateurs turned the cars out for trophies in “A-Sedan” while pros brought the same cars to the track for cash prizes in the fabled “Trans-Am” series. The rules were pretty simple then: tune the suspension, widen the steel body for a 64″ track, get really good brakes, install a roll cage, then jack up the Holley 4-barrel carburetor and pour a 5 Liter, 500 horsepower, engine under it. The cars looked like ones you could buy from the dealer down the street. Mostly.

The Trans-American Sedan Championship began as a manufacturers’ series for racing these pony cars. The original races were open to cars in SCCA’s A and B Sedan classes; The Over 2.0 Liter and Under 2.0 Liter cars ran in the same races. The original races that most fans remember included the AMC Javelin, Chevrolet Camaro, Dodge Challenger, Ford Mustang, Mercury Cougar, Plymouth Barracuda, and the Pontiac Firebird. Oldsmobile had no pony car. Mark Donohue won the championship in 1968 and 1969 driving Camaros for Roger Penske. He returned in 1971 to win in a Nash. As an aside, the Pontiac Trans Am was named after the series. The last time a Pontiac Trans Am won a Trans Am was in 1984; the model has won 7 of 446 events. 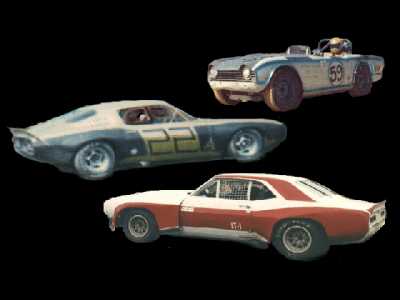 Back to me. I raced Camaros in the 1970s but SCCA “evolved” the classes out from under me.

“Put the A back in SCC” first referred to a grass roots campaign within the SCCA when the club dropped the A Sedan category in favor of lumping all the A Sedans together with the top two roadster categories to form the new class called GT-1. Camaros were a second or two a lap slower than the “production-class” Corvettes at a track like Lime Rock so SCCA also changed the way we built the cars. Although designed for the big Detroit iron, today’s Trans Am and GT-1 cars are front engine, rear wheel drive, tube framed cars with body work cleverly made to look like a street car. (As an aside, most are very, very similar to the NASCAR Nationwide short track race cars.)

We Luddite A-Sedan and Trans Am drivers didn’t much like the change. We asked SCCA to put the A (Sedan) back in their line-up. They did not although in 1995 the club did start the amateur-level American Sedan class for cars which is cross between Showroom Stock and the old A-Sedan.

The Trans-American Sedan Championship died in 2006 but has come back. In 2009, Jaguar won the championship in a car that doesn’t look remotely American. Other competing marques include Audi, deTomaso, and Porsche. The 2010 series will race at New Jersey, Mosport, Miller Motorsports Park, Lime Rock, Toronto, Brainerd, and Virginia International Raceway.

And that’s exactly where this history lesson is going.

The Trans-American Sedan Championship began as a manufacturers’ championship for American-made sedans. I’ve been looking at and test driving that new breed of sedans and I guarantee that the 2010 Chevrolet Camaros, Dodge Chargers and Challengers, and Ford Mustangs are faster, better handling street cars on street tires than my 1969 or 1971 full race Camaros.

Not only that, those cars look like real Trans Am cars should look.

I think it’s time again to put the A back in SCC as well as in Trans Am. This time, though, let’s make it a series for American sporty cars. It is time to celebrate just how good American cars can be.