My old friend Lido (“Lee”) Bruhl is a true believer in ObaMathematics-1-. “We never made any claim to fiscal responsibility, as your Republicans keep doing,” he said this morning after he praised the Senate Health Bill. “The Republicans left the largest deficit ever, even allowing for two wars in progress.”

That has so many holes, I just don’t know where to drive my 18-wheeler first.

Fiscal responsibility. “I will not sign a plan that adds one dime to our deficits, either now or in the future.” Must have been a famous Republican president who said that.

“My” Republicans: Heh. I have retracted the Goofy vote. I keep trying to join the Librarian party. Unfortunately, they all want to shush me.

Deficits: Deficits are not a dick-sizing contest.

Warning: the following couple of paragraphs include actual fact and even two definitions about counting on your fingers.

The annual “Deficit” is simply the difference between government receipts and government spending.

The ongoing “National Debt” is the total cash money the federal government (that’s We the People) owes to the people and businesses and countries from whom the federal government has borrowed. The government “sells” Treasury Bills, Notes, Bonds and Savings Bonds, and more to our lenders. About 25% of the total national debt was held by foreign governments in 2007. Mainland China holds about $800 billion in addition to the $1.4 trillion cumulative trade imbalance. Each and every one of us We the Peoples owes about $30,400 on the national debt right now. Each. Cash money.

That’s simple obfuscation. There is no deficit “carryover.” The real issue is the national debt.

The United States has been a debtor nation since 1776. We borrowed money to finance the Revolution before we were even really a country. National debt varied through most of the 19th century and began a steady growth about 1910. F.D.R. and Harry Truman had Depression-era social programs plus World War II to pay for. They borrowed to do so. On average, Eisenhower, Kennedy, Johnson, Nixon, Ford, and Carter grew the debt through 1980 at about the rate of inflation. In actual dollars, the national debt quadrupled under Reagan and George H. W. Bush and about doubled under George W. Bush although his early budget surpluses did decrease the debt from 2000-2002; it began to climb again with post 9-11 spending. 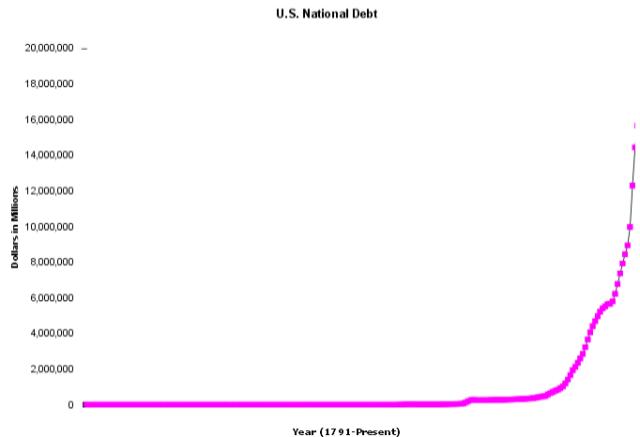 A more telling piece of data than the billions of debt dollars is how that debt compares to how much we actually make.

The Gross Domestic Product (GDP) measures how much all the goods and services we make sell for in a year.

Let’s compare how the national debt rose against how the GDP rose.

The 2010 ObaMathematics Budget will bump the debt another 10% to about 100% of GDP. It will remain there as long as real GDP growth (after inflation) actually happens. Since the consensus estimates from most analysts show much smaller growth in GDP, the debt will actually soar past 100% as ObaSpending continues. The CBO projects the debt to double again (to $20 trillion) by 2015. Other estimates take it higher.

Only one American President, Andrew Jackson, ever dropped the national debt to zero. That was on January 8, 1835. Every other president of every political persuasion has increased it.

“I guess you would rather have McCain who would have been amazing on international affairs, but even he admitted he had no ideas or platform for domestic recovery?” Lee said.

Under the circumstances, when the economic “recovery” programs created with ObaMathematics have created somewhere just south of zero new jobs and will run up the debt service We the People must pay to $700 billion per year (seven hundred billion dollars), “no ideas” for domestic recovery sounds like a pretty good idea. Or at least a cheaper one.

We should always choose a President who does nothing over one who does everything wrong.