Art-Less, a special “no immigrant” exhibit, starts today at The Davis Museum at Wellesley College in Massachusetts. All work that was created by or donated by immigrants will not be displayed until the President’s Day weekend. Curators have removed paintings and shrouded cases with black cloth. The initiative highlights immigrants’ impact on the world of art. 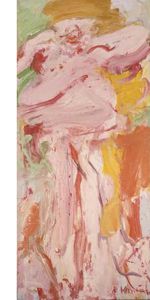 Immigrants to the United States created about one-fifth of the work in the Davis Museum‘s permanent galleries. Their collection includes work by Swedish portraitist Adolf Ulrik Wertmuller who emigrated to the United States in 1794, Willem de Kooning who came here from the Netherlands in 1926, Italian sound sculptor Harry Bertoia who moved to Detroit in 1930, Laszlo Moholy-Nagy who moved to Chicago to become the director of the New Bauhaus in 1937, and more.

“We have removed or cloaked these works to demonstrate symbolically what the Davis Museum would look like without their contributions to our collections and to Wellesley College, and to thereby honor their many invaluable gifts,” the museum told CNN.

Of course, that art was created by people who entered the country legally — Walter Paepcke, the Chairman of the Container Corporation of America, invited Mr. Moholy-Nagy, for example — so Wellesley’s political statement is at best mixed.