In our prior episode, I took some days off in Paradise Valley, then fired up the (new)(white) truck for the trip back up to 6,500 feet elevation.

It takes a lot longer to head over the mountain than I remembered. I went around the Mogollon Rim (elev 7,500) in northeastern Arizona on the way. 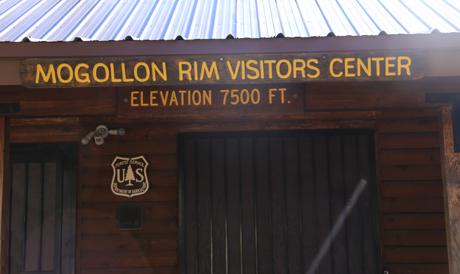 It’s 331 miles and should take 5 hours 25 minutes but I stopped to pee and to take a picture or two and then lost an hour to the time zone difference.

And, of course, it was good to get back on the Mother Road. Remember to slow down for the Notel Motel. 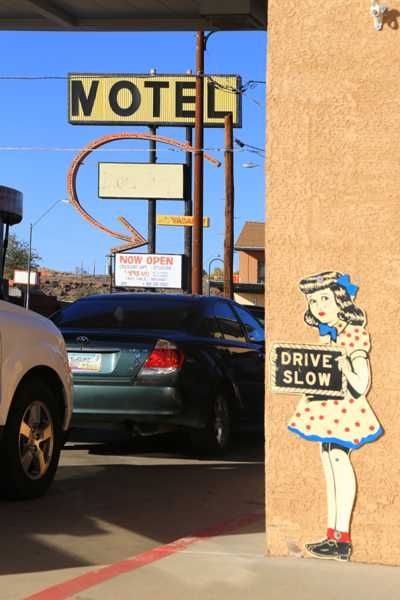 The truck ate up the elevation change again and I avoided staying in the Notel. Still, I took a couple more days off to visit once I got back in New Mexico, of course.

The radar showed serious, heavy rain over Texas from Amarillo down to the Alamo and east all the way to Louisiana, all following a Front that had bowed and stopped from Roswell to southeastern KS where it turned and headed for Buffalo. The slow moving low pressure system riding that Front will brought increasing chances for rain over much of NM and TX for my entire tour there.

I reloaded the truck in the rain in Grants but I figured out a way to prop the bumbershoot up over the back window of the cap. Unfortunately, I thought of that after I had filled the coolers with rainwater. I got everything in and battened down and left about on schedule. It rained hard enough along I40 that I slowed down to 55 in a couple of spots when I started hydroplaning just a little.

The Albuquerque motel that was holding my driver’s license hostage wasn’t where their address says it was but I found it by asking at all the other motels along the strip. Finally recognized it. They hadn’t “refound” my license so I continued on my way on to Roswell to find the little green men. I had high hopes they would accept my latest colonoscopy results.

I drove through the mysterious, desolate village of Encino, pop 94, the city of dusty oaks on US 60 where I took some photos of Encino Motel Management. I’m thinking Encino doesn’t need a whole lot of motel management. 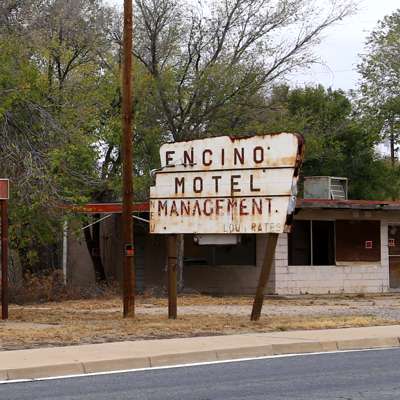 The highway going into Roswell has a lot of irrigation running and a number of green fields that stand out from the surrounding scrub.

I read here in Roswell that they’re going to launch some weasels up in a rocket.
“So where are they headed?” I asked.
Otter space, of course! 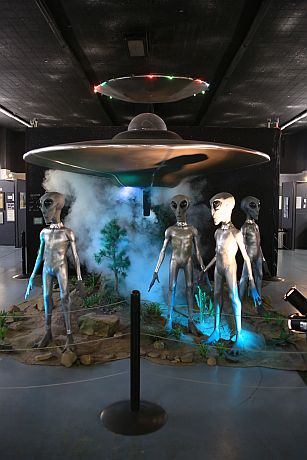 In 1947, something happened during a severe thunderstorm northwest of Roswell, New Mexico. Was it a flying saucer? Was it a weather balloon? What happened? The Roswell UFO Museum has a lot of documentation and a lot of detail but I couldn’t get past the humanoid appearance. It’s just too easy and too science fictiony. The 1990 sighting in Doylestown, PA, did catch my eye, though. And my colonoscopy results did get me a reduced admission price. 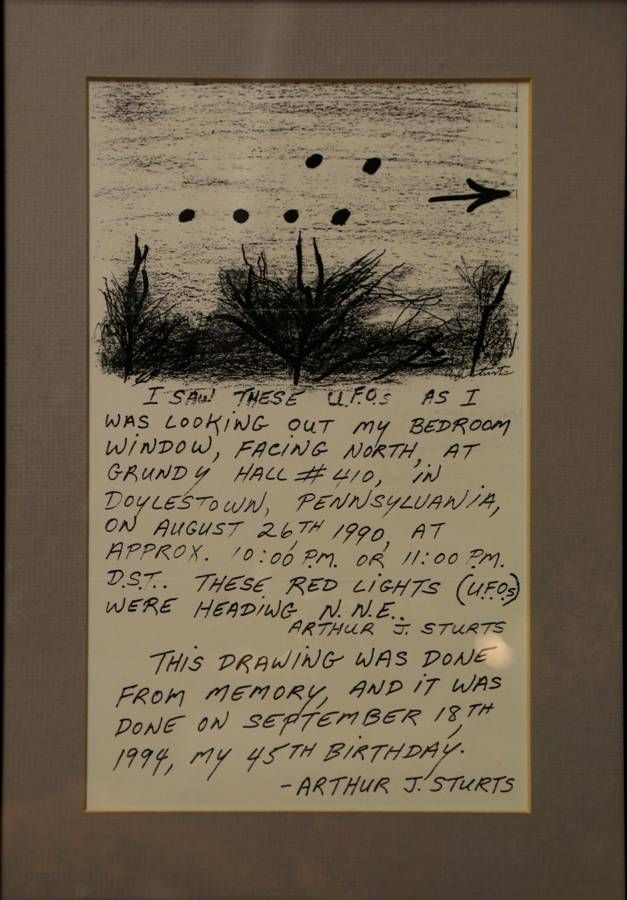 The Budget Motel had my reservation and was ready for me. The desk clerk told me I could plug my truck into my room, but the door seal was too tight for the cord. She gave me another parking space right next to the office and let me plug in there. And if I had had a mini-port-to-HDMI cable, I could have used their 32″ wall mounted Samsung for a computer monitor. The room a/c-heater fan was too loud, though.

The motel backed onto the Emergency Room landing pad for the local hospital. Two deliveries came in while I was jockeying the truck around.

I went to the Roswell Museum and Art Center the next morning. It’s home to the largest public collection of works by Peter Hurd and Henriette Wyeth, painters whom I knew of but had never met. I found both have become synonymous with the landscape and culture of southeastern New Mexico. Hurd was raised in Roswell where his father worked a small ranch southwest of town. His father hoped he would pursue a military career, but after NMMI and two years at West Point, Hurd dropped out of West Point to study with N. C. Wyeth in Chadds Ford in the 1920s. During the summers at Wyeth’s home, Hurd met Henriette, Andy’s sister and the eldest of the Wyeth kids. They were married in 1929 and moved permanently to their Sentinel Ranch in San Patricio, New Mexico a few years later.

I had thought of him as one of the multitude of Brandywine artists and never twigged that he might be from somewhere else. I really enjoyed that collection.

The New Mexico Military Institute is the only state-supported military high school and two-year college in the western United States. NMMI also has a “notable” collection of art and historical objects in the Roswell Museum. Their Duty, Honor, Art was a mix of portraits of officers and more traditional landscapes. Art of the Book was fascinating as was Artists by Artists (portraits of artists by others) but I didn’t think much of the Bravo/Grande project. That “interdisciplinary project that examines the relationship between regional communities and the river” but it was all pretty two-faced to me. 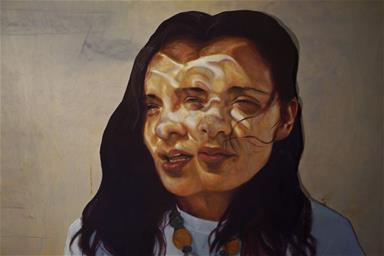 I didn’t visit the Goddard Planetarium because their shows are on Wednesdays and one Saturday each month and, unfortunately, I missed the Robert H. Goddard Collection of scientific equipment and rocket parts.

Next stop Midland, TX, for race cars and oil wells with maybe the rain coming right along with me.