In our prior episode, I was headed almost a mile downhill — that’s a mile of elevation — toward Paradise Valley and some days off from traveling.

Not so much days off, though. I was in the 48th state (the last of the lower 48) to be admitted to the Union) for the last week of October and into November so there were yard sales, parties, decorations, electioneering, road construction, and it all lead to an excitement-filled day at the Arizona State Fair where, of course, I ate something on a stick. I took very few photos, though.

The freezer didn’t like the desert heat so my first job was to experimented with a big floor fan. That worked a treat so I bought two 12v fans. They didn’t move enough air, so I put a 110 volt fan and an inverter on the shopping list.

On the other hand, I got to watch the street get torn up. SWMBO likes to point out that it is impossible to drive anywhere without hitting road construction. I’m pretty sure that, for example, the Florida Department of Transportation is bidding a four-lane highway with a 40-foot median across Puffin Island. 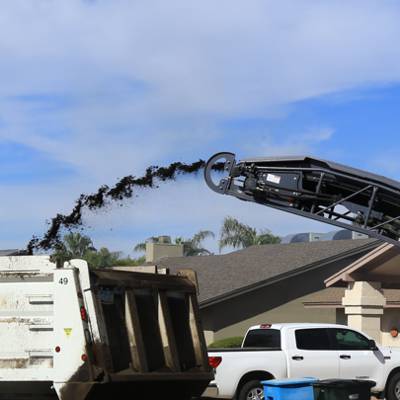 I went to a great yard sale the other day. There was sports memorabilia, lots of electronics, and tools, guy stuff. A huge 60 inch flat screen TV caught my eye with a price tag on $50 on it!
“You only want $50 for this big TV? It must have something wrong with it,” I said.
“It works great,” Livvy said, “except when you turn it on the volume goes up stays all the way up.”
“Man, I sure can’t turn that deal down!”

Our friend Livvy came into town to join some high school buddies for a road trip of their own. Sadly, her husband had passed away before she arrived — she found him in the living room surrounded by quail — and she ended up having to deal with his collections of collections.

Note to self: start your own inventory now.

Homer had bought stuff. Lots of stuff. He had amplitudes of amplifiers, cartons of clothing, loads of light bulbs, a mountain of microwaves, piles of ‘puters, stacks of speakers, volumes of VCRs, a DeWalt 12″ sliding compound miter saw that I would have loved to own, a 9″ electric fan that I do, and too much more to list. The quail weren’t for sale.

Livvy invited a bunch of friends over to help her identify and organize the goods and get ready for a yard sale to end all yard sales. As an incentive, we got first crack at the goodies. Fortunately, I had enough room in the truck for a computer monitor, brand new in the box, two VCRs, a tile cutter, a dozen rolls of ScotTissue, and the great find, a power inverter and the 9″ electric fan that I needed for the freezer.

That didn’t make a dent in the inventory, though, so Livvy is still having sales.

We went to a party where I got spend the evening catching up with Mardelle, a Burner friend.

She wants to come back as a weatherman in her next life. OK, weatherperson. I spend a bit of time every day reading the radar and moisture charts and tracking Fronts and pressure gradients. “Where else can you be wrong all the time and still keep your job?” Mardelle asked. I think I actually do better than 60-40.

Halloween decorations took center stage as well. I wonder how one finds enough time between seasons to switch from ghosts and goblins to Yule logs and mangers? 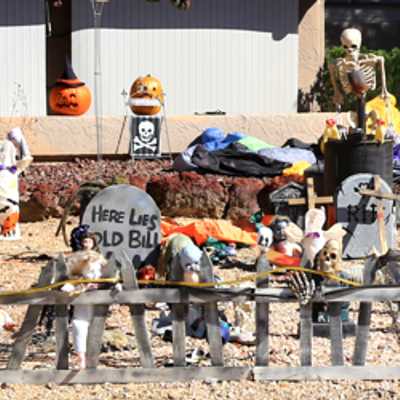 State fairs are usually an annual recreational and competitive get together to promote state agriculture and they continue to exhibit livestock. The first U.S. state fair was held in Syracuse, NY, in 1841; the New York State Fair has been held annually ever since.

The Arizona State Fair was a territory fair before Arizona was a state. Early on, the entertainment was horse, pony and mule races, with exhibits of farming, home economics, and cattle filled the grounds. With over one million visitors in the month of October, it is now one of the top five state fairs in the world.

I had a rabbit as a kid, so the rabbit warren drew me in. I never knew there were so many different types of the family Leporidae. More even than chickens. There were American, American Fuzzy Lop, American Polish, Argent Brun, Champagne, Cinnamon, Dutch, Dwarf Hotot, English Lop, Flemish Giant, Florida White, French Lop, Harlequin, Havana, Himalayan, Holland Lop, Jersey Woolley, Lion Head, Mini Satin, Mini Rex, Mini Lop, Netherland Dwarf, New Zealand, Rex, Satin, and Tan bunnies. Some divisions like “Rex” have as many as 18 classes, divided by color and fur. And we saw chickens. Lots of chickens.

There are 12 divisions of chickens with as many as 53 classes including the famed Transylvanian Naked Neck.

I had to come back to South Puffin, though, before I met a turkey inseminator.

We rode the 130-foot tall La Grande Wheel, the largest transportable Ferris Wheel in the world but skipped the dinosaur adventure of Jurassic Trail. Purdue put on The Edible Journey, an K-4 interactive exhibit to identify what a farm is and what farmers do and to understand the role of science in food production. Stage of the Arts hosted demonstrations by working artists and photographers. We skipped Rock U, the Institute of Rock ‘N’ Roll, because we have been to the M.I.M. The ladies wanted to visit the Shopping Pavilion (formerly the “Commercial Building”) so we saw everything from boots to books, cookware to collectibles, mops to mattresses and pillows to purses.

And, of course, we had $8 ice cream and food on a stick. I’m still surprised by the dairy industry in the desert. 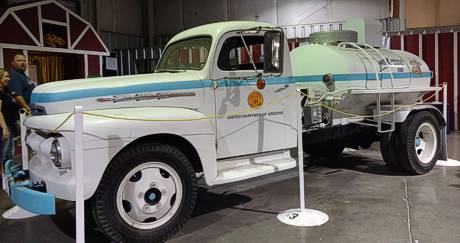 In bad news, I lost my driver’s license in Albuquerque. In good news, I made that amazing discovery in the comfort of a private home, not while a sworn officer was waiting for me to produce ID.

I spent a while tracing my steps and determined it could be in only two or three establishments. I Googled their phone numbers and called. Not at the gas station. Not at the restaurant. Not at the motel.

Oh, wait. The motel called back. “We found it!” the daytime desk clerk said. She promised to mail it to me.

In more bad news, my absentee ballot wasn’t waiting for me when I arrived in Arizona.

That’s easier to figure out than many messages have been and was a great reminder to look for the darned ballot.

I did find out why my ballot hadn’t arrived. The Monroe County Supervisor of Elections tracker website says “Ballot 1 was sent Thursday, October 13,” to my South Puffin post office box. Apparently writing the address where I was visiting in my fine engineering hand wasn’t enough. OK, it was in Microsoft Technical typeface. Anyway, it defaulted to my home address. I called them, resent the ballot request, and then called again. I waited and waited and it did get here before I had to leave.

I can’t believe the USPS has a substation in an Ace Hardware but the clerk said her magic mystery screen promised delivery by Friday, November 4, so I paid her $1.15 and left my ballot with her.

I never did talk to any of the robo calling candidates and, while my ballot made it to Florida on time, my drivers’ license never arrived in Arizona.

THE CUBBIES WON THE WORLD SERIES FOR THE FIRST TIME SINCE 1908!

The inverter didn’t seem to be working but I figured it out in daylight. It has not only a switch on the inverter but also a black one on the black 12V “cigarette lighter” plug. Hard to see in the dark. I attached the inverter to the battery box and tested it; it’s noisy but it runs the 110V fan perfectly and that keeps the freezer cold.

In the usual story of this trip, I packed up to leave before Veteran’s Day. Once each year, at 11:11 a.m. on 11-11, the sun shines perfectly on this memorial. I left Arizona behind before it happened. Here‘s the story.

On the next leg, I’ll retrace some of my steps to stop at the Mogollon Rim, look for my license, and make sure I have my colonoscopy results handy.