The Electoral College convenes in every state today, the last Monday before the start of Winter.

A friend found this meme:

“I’m outraged at the lack of outrage, especially on my side.” former Rep. Joe Walsh said on CNN. “I get that the country’s divided, but my God, a foreign government interfered with our election. That should piss everybody off!” Mr. Walsh is a talk radio host from Illinois who served one term in the U.S. House of Representatives.

If a foreign government hacked our election, that’s an Act of War and I will indeed be outraged.

If the Obama Administration is making up the hack, that’s a Criminal Act and I will indeed be outraged at that.

Here’s all we know for sure so far:

• Ms. Clinton and the DNC conspired to commit election fraud and I am already outraged over that.
• The DNC leaks have been thoroughly dismissed the Obama Administration, by the DNC, by most pundits on the Left, and about half of social media. “It’s been non-news for months. I don’t understand the continual flogging of that dead horse,” one friend said. That’s outrageous.
• The Department of Homeland Security tried to hack Georgia‘s voter data computers. CA, CO, CT, DE, IL, MA, MD, ME, MN, NH, NJ, NM, NV, NY, OR, RI, VA, VT, WA, and DC allowed DHS in without a hack attack (note that I’ve been unable to confirm that list). This is only a little outrageous, right?
• There is a sudden “consensus” among intelligence agencies that the Russians committed election fraud (but that Ms. Clinton did not). And no one has seen the proof. Outrageous.
• The president has ordered the Office of National Intelligence to conduct a review of the Russian interference. The Director of National Intelligence said Friday that they conveniently could not brief the Electoral College because of the review. Another outrage.

Apparently the Administration thinks election fraud by a foreign government is not actually an Act of War. (“I told him to stop it,” Mr. Obama claims he told Mr. Putin in the strongest possible terms.) That is outrageous, as well.

There’s more to this story.

Democrats committed enough election fraud to get Ms. Clinton nominated but couldn’t pull off enough to get her elected. I cited the Daily Kos because it is a fake news source that Democrats quote wholeheartedly.

Pressure on members of the electoral college to select someone other than Donald Trump has grown dramatically in the weeks since the election. (If this all sounds too too familiar, recall that Democratic operative Bob Beckel plotted to kidnap Bush 43’s electors to push the election into Congress. Mr. Gore himself tried to flip “faithless” electors.)

Now they have a “new” program they hope we don’t recognize. 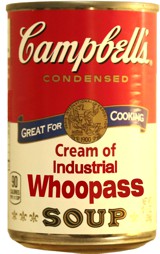 Unlike Republicans who questioned Mr. Obama’s credentials and fitness to serve as president in 2008 and 2012, the “Just Say No” Democrats have used the hack attack to try to “turn” half the Electoral College.

It’s time for something actually new.

I agree with the Democrats but they don’t go far enough. It’s time to open up that can o’ whoop ass. It’s time to rend both parties asunder. It’s time for the Electors to buck the parties and go rogue.

Democrats want the Electoral College to subvert the democratic process and pick an “acceptable” candidate? I agree. They should cast all 538 votes for Ellen Kullman, or Ryan Lance, or Alan Mulally, or David S. Taylor for President and they should cast 538 more for politician and businessman Jon Huntsman for V.P.