Note to self: put Band-Aids in the new truck

South Puffin is in the middle of the glorious Middle Keys1 and more than 50 miles to Key Weird. We don’t go to mile marker 0 very often but we had to on Saturday to pick up a new backpack for SWMBO’s upcoming trip to the frozen north.

First we stopped at the Flea Market where Larry had scratch-and-dent tomatoes which is always a good find. He had more fresh beans, too, picked just Friday afternoon.

The Parade of Paws is the Florida Keys SPCA Animal Care Fund‘s third annual fundraiser. The pets didn’t have the over-the-top costumes of Fantasy Fest but it was still practically perfect. The day started when a local minister blessed the pets. We chatted with a woman who was afraid this would be her 11-year old Goldy’s last blessing. Lots of fun fur. We met Deputy Dawg in his own dress green uniform blouse with a Monroe County Sheriff deputy’s patch on the sleeve. His personal deputy carried him in the parade. Several people carried signs to “Give rabbits a voice.” I have no idea. One 12-ish-year old girl walked around with a rat on her shoulder. Plenty of smallish dogs in Santa outfits and others with red antlers.

All good projects require blood to be shed, right?

We also saw Santa himself. I know it was Santa because his beard was real. He said he had fake padding, though, because he had lost 100 pounds.

And we did well at shopping. Sears had the backpack and the pickup process is even easier (and more robotic) than it was back in the catalog days. The Sears robot read my credit card, displayed the order, and notified Hector. He pulled the backpack and had it in my hands in a couple of minutes. We also saw the Tempur-Cloud Supreme Breeze mattress for 1,000x the price of the backpack, $9,996.00. We didn’t buy that. 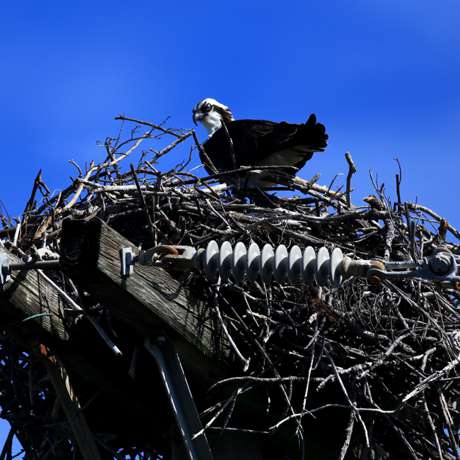 SWMBO noticed the big nest platform on Summerland before I did. Someone was home: a largish black bird with a white head. That was enough to swing a U-ie on the chance it was a bald eagle. It was an osprey. I had the 400 lens mounted on the tripod so I flipped a camera onto it and used the folded up tripod as a “steady cam” with the feet in my belt and camera body in my hand. Worked a treat. I ran the power winder and got a bunch of closeups of the bird in the nest, taking off from the nest, flying with a mate, and Fat Albert. Ahhh.

Then my feet went right out from under me. I slipped on the marbles and uneven surface where we parked and went down on my hands and knees. Scuffed my knees and punctured my hands. All good projects require blood to be shed, right? Sheesh.

It was the shoes, darn it.

Ancient History from 2011
Five years ago, I had just “holed” the walking surface of the heel of a pair of high tech, ultra light sports shoes by stepping on a pebble.

I have only one data point (my Reeboks) but I would think so. That said, any relatively thin, soft rubber covering that bridges a honeycomb is the most vulnerable design.

We went to the now-gone Reebok outlet in Essex Junction, Vermont. I had a coupon and, since my then-current “good” sneakers were 10 or 15 year old Reeboks, I have a definite brand preference.

I wanted cross trainers that felt good in a brief walk around the store. Shannon the saleslady did a nice job of showing and demonstrating the features and guiding me into the right shoe (she threw in the left one, free).

She first wanted me in the air bladder sole, but I ‘splained about the stones I walk on that caused the holiness of my current soul so she moved right over to a solid foam core. I was predisposed to Reebok but the initial prices scared me. That’s when she showed me they were priced at $10 off and the store was running a Buy One, Get One for Half price or Buy Two, Get One Free deal. On top of that I had the 15% off your first purchase coupon and Vermont doesn’t charge sales tax on clothing. With all that, they cost $25 per pair and I was “all set for the next 10 years or so” I thought.

So. I AM™ now the proud owner of 3 (yes, THREE) pairs of Reebok cross-trainers, two for down south and one for North Puffin.

“Why on earth do you need three pairs of shoes?!?” SWMBO asked then.

Have you counted yours, my dear?

I walk about two miles at a fast pace every morning. I swapped shoes in the middle of walkies and it was a good experiment. The new shoes tended to give me a straight heel-toe strike so I think I land more in the center of my heel than on one side or the other. The old shoes both have the hole blown into the heel on the outside and yet I found that they pronated me (is pronate a verb?).

I wouldn’t mind having shorter laces in my new sneaks but they have funny fabric slides instead of holes-and-eyelets for the laces and I don’t really want to spend the rest of my life threading the darn things.

I looked after the fact and saw that the soles on both shoes are about worn out. The uppers and the rest of the shoes are still in good shape. They give good, firm support and comfort. Click the pic to see. 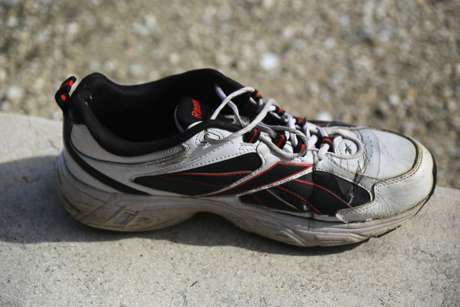 That’s just wrong. I actually have four pairs of walking shoes, all about the same age, that I walk in on alternate days. Since I spend about half my days in South Puffin, each pair of the shoes here probably gets pounded about 85-90 days annually. That adds up to just 850-900 miles in five years. I do mostly walk on pavement and some loose stone down here but I’m pretty sure we got better mileage out of our sneaks when we were kids.

The one Reebok store in Vermont evaporated three or four years ago but the Florida Outlet Center in Florida City may still have a Reebok outlet. I hope so because I like the fit and support I’ve gotten with that brand. I just hope they come with Kevlar soles.

The Band-Aid brand covering on my finger has lasted through walkies, food prep, raking gravel, the beach, and at least two showers.