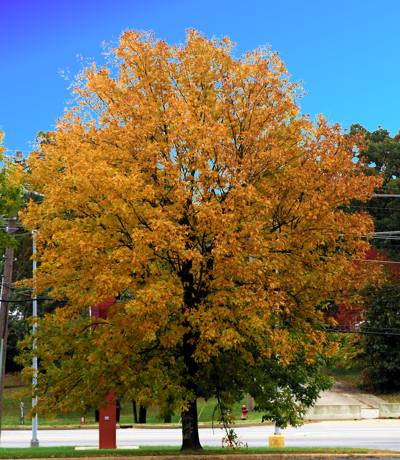 In our prior episode, I had stayed in Weatherford, OK, and was off to Dead Women Crossing. There wasn’t a lot to see at the Crossing but I found some ghosts anyway.

I didn’t travel far that day. Weatherford, Oklahoma, to Amarillo, Texas, is under 200 miles and just about three hours driving time but I managed to take all day doing it. I went through Dead Women Crossing twice and in the meantime found sweet potatoes and cotton and more than enough red clay. My nice white truck is red.

Schoolteacher Katie De Witt James filed for divorce in 1905, then left by train from Custer City with her 14-month-old daughter Lulu Belle. The rest is an eerie, haunted tale of an angry husband, a reputed prostitute, a detective, and a headless corpse. A century has bleached Katie’s bones but her name is still attached to the last bridge she crossed.

Farther north along the N2440 Road, I picked a boll of cotton and discovered that harvesting sweet potatoes is still back-breaking work, despite our increased reliance on farm machines. I will never again complain about paying 29 cents/pound for sweets. 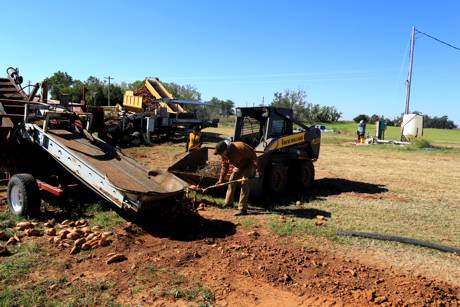 This may turn out to be the story of wind: thousands of windmills inhabit the prairie. Factory-made windmills have been used for pumping water on farms since the 1850s. Last year, wind power generated over 18 percent of the electricity produced in-state. At the end the year, Oklahoma’s installed wind capacity was 5,184 megawatts.

I’ve been following the Mother Road and stopped at the Farm & Ranch Museum in the National Route 66 Museum Complex in Elk City. I noticed that the lady on the cash register gave me the geezer discount.

“Nope,” she said. “I gave you the AAA discount.” Quick, she was. I wonder how she knew?

A couple was there from somewhere else. The museum has a Ford 9N on the floor and I said I had one. He has an 8N.

I also talked to a visiting nurse from Michigan who saw my Vermont plates. We were the only people there in shorts. She’s on her way to Phoenix for the winter. I wondered how it had gotten so cold!

I saw more windmills in the distance and went looking for them. The towers are along the historical route of the Beale Wagon Road. In 1857, President Buchanan appointed Lt Edward Fitzgerald Beale to survey and build a more than 1,000 mile wagon road from Fort Defiance, New Mexico to the Colorado River, between Arizona and California. From then until 1860 Beale, a crew of 100 men, and 22 camels built the first federal highway in the southwest. Beale’s road roughly followed Lieutenant Amiel Whipple’s trail west across Arizona through the Flagstaff area and then a little north through Peach Springs and Truxton Wash, which was named for Beale’s son, before making its way through the Kingman area and on to the Colorado River.

The 123 Red Hills Wind Farm near Elk City has 82 turbines spread across 5,000 acres on land dominated by cattle grazing. The steers were unmooooooved by the windmills.

While I was photographing the turbines, an old farmer about my age stopped his pickup to ask “Did you know the tips reach 100 mph?” I said I did and we talked a bit.

“I live close by,” he told me, “about eight miles up the road.

“You know, you and I would have done right good to own the land under these.” 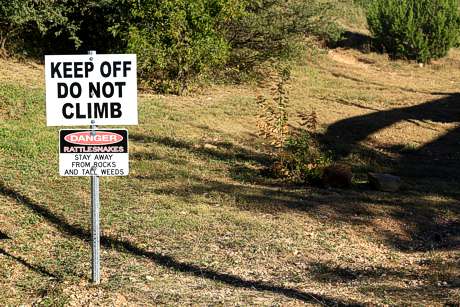 The Leaning Tower of Britten got my attention, as it was supposed to. The lean is intentional. Deliberate. Good, old-fashioned, American marketing got me to stop in the parking lot of Ralph Britten’s truck stop and restaurant in Groom, Texas. Two legs of that water tower dangle in mid-air. 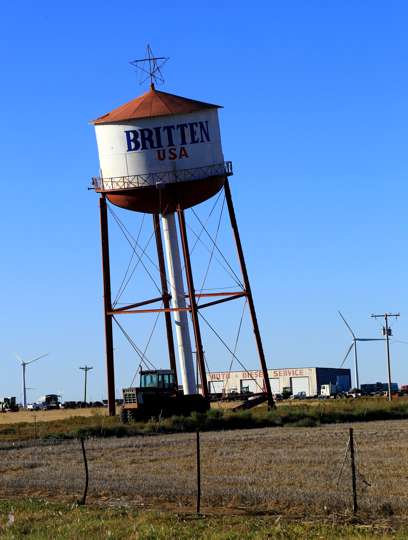 Cadillac Ranch is a public art installation in Amarillo. Chip Lord, Hudson Marquez, and Doug Michels of the Ant Farm created it about 40 years ago when they half-buried ten 1949 to 1963 Cadillac automobiles nose-first in the ground, all at the same angle of the Great Pyramid of Giza. The project’s patron, Stanley Marsh 3, also did the Floating Mesa, Amarillo Ramp, and the Dynamite Museum collection of fake traffic signs throughout the city. Writing graffiti on or the cars is now encouraged, and they are extraordinarily decorated. I may have been the only visitor without a spray can that day. 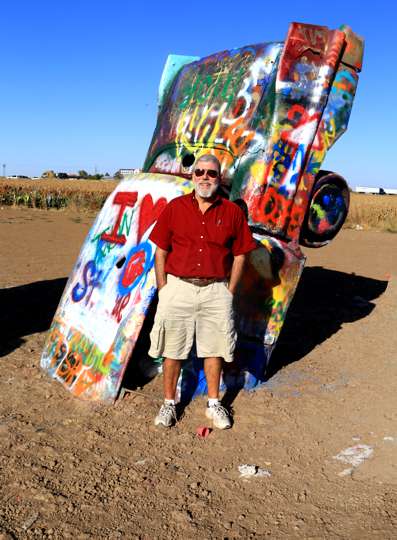 The Mustang Ranch has other attractions.

I landed in a $10 motel that should cost $20 and did cost $30 in Amarillo. On the plus side, its two-door refrigerator had a separate freezer so I could refreeze some of my ices. Maybe I should have just left them outside; I had the heat on for the first time since Vermont.

I went out to buy a cake for dessert and got thoroughly lost trying to find my way back to the motel. “Lila Too,” my Garmin GPS, doesn’t recognize the address they give and I hadn’t (then) figured out how to get it to store “right here” as a saved address.

Palo Duro and New Mexico next. If Lila Too can find ’em.