My first stop on Thursday was in Burlington, just an hour south of North Puffin. It was marvelous because I turned in all my !@#$%^Comcast gear.

The folks in the store (two “greeters” and two reps) were nice, helpful, and had me out the door in minutes. The people in the Florida Keys store are just as nice. I wonder how we can teach corporate to work that well?

I left Saturday morning for California.

In our prior episode
The freezer and “house battery” works a treat, so far, but there is a problem with the charging system. I was wandering along through Addison County when I saw that the truck voltage had dropped to 11.5. “Self,” I said to myself, “this is not good.”

I invoked OnStar and a very nice fellow told me there is nothing wrong with the truck. He found me Faulkner GMC, a dealer in Harrisburg.

The Faulkner service department was open and “wall-to-wall” busy but they fit me in anyway. The tech did a full multi-point checkup and said, “There’s nothing wrong with your truck.”

He printed out a Technical Service Bulletin. It seems I’m not the first person to complain about this issue.

TSB #07-06-03-009D Information on Voltmeter Gauge Fluctuation
“Some customers may comment that the voltmeter is fluctuating between 12 and 14 volts on their full size pickup. Starting with the 2005 model year, … trucks are equipped with a Regulated Voltage Control (RVC) system” that turns the charging system off in “fuel economy mode” to save gas.
It’s worse when hauling a camper/trailer because the house battery tells the RVC that it doesn’t need any juice.

The nice folks at Faulkner washed my truck and gave it back in under an hour.

The fix is simple. Use Tow/Haul mode which bypasses the RVC system or turn on the headlights which puts enough extra demand on the system to increase the generator output. I turned on the headlights.

I continued on over the “blue route” toward New Stanton, PA.

I haven’t driven the Lincoln Highway through western Pennsylvania in decades. US 30 was a lovely, lovely ride over some of the nicest, smoothest road I could pick. West of Harrisburg it is twisty and hilly and the trees are colorful right now and there were only a few traffic lights.

SWMBO will be happy to learn that I did not buy the Lincoln Outlet although it was for sale and I did stop to look. 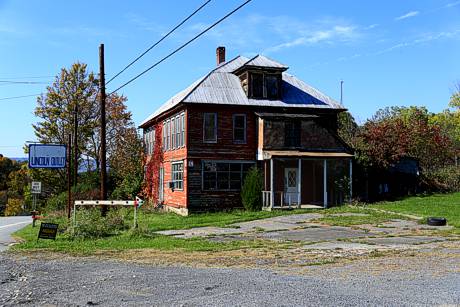 There was a Free Colonial Trial at the Franklin County Jail. Downtown Chambersburg was in the middle of an Apple Fest free family street fair art, food, crafts, music and kids’ activities, and carnival rides. 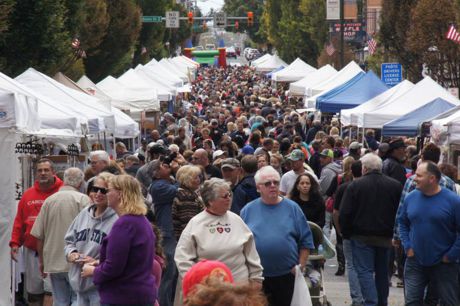 I could “Check Your Batteries” at the Franklin Fire Department but mine were working fine and I think they meant smoke detectors, anyway.

I checked in to a motel in New Stanton and headed on to find Mingo’s bridge, a cute little Henry bridge. This isn’t the Burt Henry Covered Bridge over the Walloomsac River near Bennington, Vermont, nor the span in Washington County, Ohio. The historic Henry Covered Bridge in Monongahela, Pennsylvania, spans Mingo Creek. It is designated as a historic bridge by the Washington County History & Landmarks Foundation. 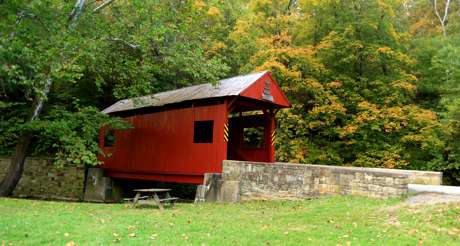 After that, I drove 57 miles to Indiana, Pennsylvania, for 16 ounces of 6.6% North Country Local 66 (“brewed exclusively for Pig Iron”) red IPA and about a pound of pastrami on a classic Burgh sammie.

Sunday, I continued on to California by all the back roads. Holy Coffinlids, there are a lot of dead there. I passed three cemetaries and Howe and a private mausoleum on the way in.

Political commentary:
I drove the length of Pennsylvania Ave in California and found not one Hillary Clinton sign.
In fact, I drove the length of Pennsylvania and saw nothing but Trump/Pence. I saw two anti-Clinton billboards, one with Pinocchio’s nose, and heard one anti-Clinton radio ad. That was it in a state the media thinks will go Democrat.
This is a small, scientifically unvalid, sample but it is interesting nonetheless.

Every house coming into California is anchored on the side of a mountain. I would not want to plow their driveways. The city itself was very depressed with houses in deferred maintenance and small streets. 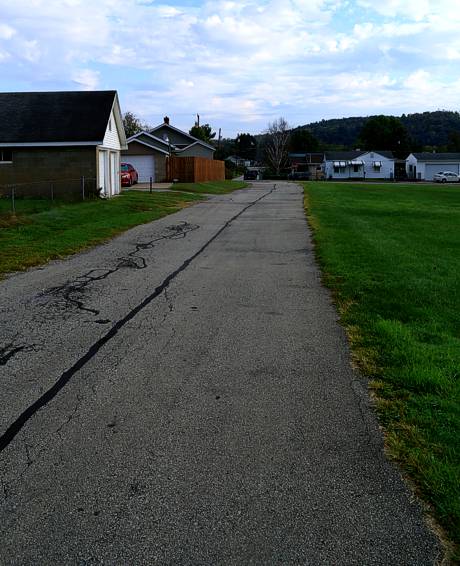 In two days, I drove through Indiana, California, Washington, Ohio, Indiana, and the Yukon where there are “Live Girls” and “Free Beer.”

I’m relaxing in West Lafayette, Indiana (the state), today. I have met three horses and a deaf German Shepherd, talked about teaching, told a lot of lies, and I have been to Menard’s where I bought a barn sash.