Thursday was de day as opposed to D-Day which is much more important. The Puffintruck has left on an adventure.

UPS tracking finally found the replacement freezer after its hurricane delay. It should have arrived some time late afternoon Tuesday, only one day after the original plan, since our regular UPS driver’s route has us just about the last delivery of the day.

I saw the UPS truck at the Post Office (did you know that UPS delivers to the Post Office? They have for years) on my way back from Swanton before noon.

I stopped, blocking traffic and rolled down the window.

An unfamiliar face leaned out. “Who are you?”

I told him the address.

“Oh, yeah. I just dropped it off and picked up the return. It’s in the truck.” He pointed at the cavern behind him.

In a fit of pre-planning, I had pre-positioned the tractor with the return freezer box in its bucket right in the driveway where it was unmissable and it worked! The driver dropped the new one in the tractor bucket right where the first one head been.

I eventually muscled the freezer into my truck and taped its insulating box around it. Plugged it in and turned it on and it works. It came down to zero in reasonable time and held the temp without running as much as the first one seemed to.

The replacement freezer seems to work much better so I loaded it up Wednesday for the real test. It passed with flying colors. I loaded my suitcase and fuschia footlocker. Filled up the truck with all the stuff going back to South Puffin and pumped the tires up to 44 psi.

I finally left about noon on Thursday, on schedule but an hour later than I wanted to be. In the rain.

Vermont needs the rain. We have more beach than we’ve ever had because the lake is soooooooo low. I spoke to a lady at a gas stop who had just been up the Connecticut river and didn’t need a paddle; she could walk on the rocks. It didn’t rain enough. This little band of showers was done and gone in a few hours. It ate my shorts in gas mileage while I drove through it, though.

The foliage colors are coming along nicely. The higher elevations are near peak but even down along the Champlain Valley is vibrant, even with lowering skies. A beautiful ride.

I spotted this lowrider sport truck at, of course, a truck stop along a Vermont Highway. 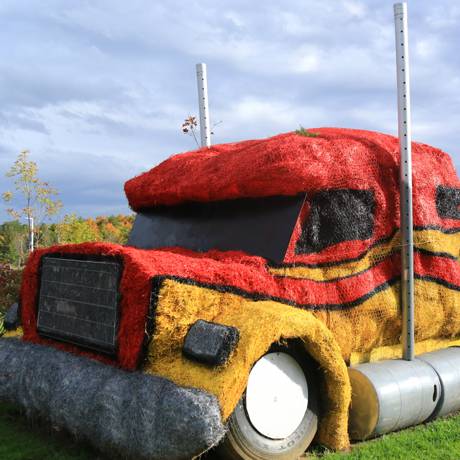 The rain had pretty much stopped by then, a good thing for me.

The freezer and “house battery” works a treat, so far, but there is a problem with the charging system. I was wandering along through Addison County when I saw that the truck voltage had dropped to 11.5. “Self,” I said to myself, “this is not good.”

I pulled over, turned off the truck, popped the hood and the tailgate, and opened the battery box looking for smoke. No smoke. The freezer was humming along happily. No smoke under the hood, either, so it appears I didn’t blow anything up. I repeated that twice more before simply flipping the switch and finishing the day with the freezer running on the house battery.

OnStar says there is nothing wrong with the truck. Liz Arden says “See, I told you you should have installed that big, honking solar panel!” I says, “I see a stop at a GMC dealer in my near future.”

Not much else of note happened on this first leg. Lila has lost her Australian accent — (Lila is my GPS). The new one dumped the nice Aussie in favor of a bland American voice and has a slightly different idea about routing. She wanted me to go to Bethlehem via Maine which I thought was stretching the idea of road trip a bit.

We did alright, Lila and I, once I convinced her who was right and then as long as I actually turned where she said to instead of turning the other way. I did that a couple of times and it extended my trip a bit. I still averaged 22 mpg on the “dry” leg.

I had a nice meal, good visiting, and have the truck plugged in to the house.

Next stop. California and Indiana and I won’t even leave Pennsylvania to do it.