No, not the “perfume.” That crap makes my nose curl.

SWMBO complained that I was obsessing over trailers last night.

I’m an engineer, not just because I went to school for it but moreso because I need to drill and chew and drill and chew to get the facts, find the data, figure out how something works. I do that with the news that is a staple of this column. I do it daily with the weather.

Weather is important to me, and not just for concerts. I have an old roof in South Puffin and a lot of grass to mow in North Puffin. I drive a car with no top. It also lets us remind ourselves that the modeling that makes the one-day Inaccuweather forecasts so wrong so often uses the same modeling as climatologists have to forecast out one century.

And lately I’ve chewed around the ankles of two different kinds of trailer houses.

Some back story. I don’t like to camp — I live on an island and I summer right on the sixth Great Lake in the middle of tree-filled lawn, so I don’t need a field with trees and ponds and beaches — but I like not having to set up in motel after motel after motel when I travel. Traveling, for me, means visiting, sightseeing, touristy stuff, photography, and working on the road. Photography and working on the road means a fair dinkum load of gear.

I’d like to go someplace, set up “camp,” and just visit and look and live there for a few days, then move a couple hundred miles and do it again.

The PTT
I also like to design and build things. Engineer, remember? I have long known that my design skills far exceed anyone who builds RVs for a living so my summer brainstorm is simple. Why not build the “camper” that purely, precisely, perfectly meets my travel needs. That becomes the Perfect Travel Trailer.

The PTT would be 6.5′ wide with a full length, four foot, power slide. That brings its towing width down to about that of the truck. Add a power mechanism to lower the top when it’s time to travel and the frontal area is suddenly no longer an air grabber. Inside the layout can be moderately conventional with about 300 square feet of floor space.

I’ve been working with composite materials all my life but I think I will build the shell in wood. It’s lighter and cheaper than steel and even than aluminum, both important, and can be pretty to look at. It’s also well within the grasp of my shop.

I had a layout ready, of course, when I stumbled upon this thirty-one foot long, 1977 Airstream Sovereign. It is pretty much gutted, ready for my PTT interior. 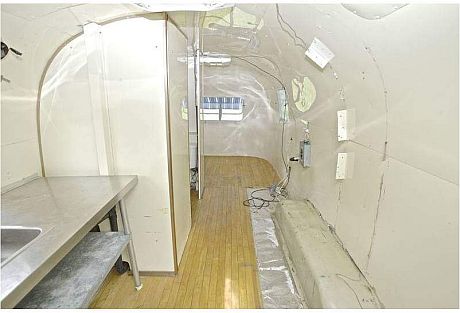 The Airstream search was a fluke but (maybe) a good one. If I can buy a shell for around the cost of building it, it means not having to source a flatbed trailer, not having to build and finish the shell, and still getting a layout I like. And Airstreams are nice looking. I don’t see much downside, other than fitting the interior through the door, if the fuel economy works out.

“How will you fit your desk and chair and all the stuff you usually carry with you? And SWMBO?” Liz Arden asked.

Number 1 Daughter has the answer. She is gung ho as long as she gets to design it.

“Just hold your horses. Some of these things have to be run past mom also. This is a project.” SWMBO said.

“Yeah, I’m not a fan of the ‘project’ aspect either. And yes, it would be a project that needs to be completely laid out before anything should start,” Number 1 daughter said. “But mommy, my girlfriend and I would love to decorate something for you as a surprise. Wouldn’t you love that, mommy?”

I am envisioning shabby chic here.

The desk’n’stuff will be done the same way I plan it for the PTT: I have in mind to do a Harper-bed (a Murphy bed concept but hinged for the space actually available) and have a shelf in the “bedroom” and a rolling desk chair that can come in there so I have a cave of my own.

Problem. Newbies typically keep their first camper for a year or two while they figure out what they really want.

Choices
I built a spreadsheet so I could obsess on my 4-1/2 camperish choices:

I suppose I could even add “Build the Perfect Bus” to the list. Nah.

Lots of advantages for each.

If I want to do any travel this year or next, I need to stop thinking and simply buy some kind of ready-to-go Travel Trailer that allows me to crawl in and sleep in a parking lot. Or do a quickie conversion of an enclosed cargo trailer.

“I guess realistically you could ‘camp’ in a relatively bare but roadworthy shell,” SWMBO said. Note the emphasis on the “you.” And she figures it would be primitive… “The mattress-on-the-floor bed isn’t bad but cooking would be limited unless you had a working generator so you could nuke and hot-plate and have a portable propane grill. Working fridge is a must and you really need that to be propane unless you can find a fridge that runs from an inverter and lots of batteries.”

It finally occurred to me that I can carry a lot of stuff like the pantry and freezer in the truck that I’d planned to store (somewhere) in the trailer. Modern 60-something quart freezers take 5-6 amps at 12VDC so the truck can power that easily underway and a pair of 50Ah deep cycle house batteries would easily carry the trailer and freezer load overnight. Run the genny only for boondocking.

“Be nice if the bathroom worked,” SWMBO muttered.

Most 50s-60s campers and boats (and 50s-60s-70s-80s-maybe-90s Airstreams) were primitive. The beds were little more than a foam pad on the floor and cooking was limited although my mom did pretty darned well on a propane camp stove on the little boat and a two-burner alcohol stove on the Richardson. Shore power takes care of A/C, frig, nuke, water heater, and heck even an electric cooktop if you want. I will definitely go all-electric in the PTT and probably would do so even in a little tag along.

The Streams
I found a pair of 25′ Airstreams over in New Hampshire.

The first is a 1970. 46 years old. The major systems — converter, water heater, furnace, toilet — appear to work. Road debris shattered the curved, right front window. There is no a/c. All the roof vents are caulked. The seller wasn’t sure about the operation of the gray water tank. Cosmetics are poor. The shell is dull, not bright, aluminum and the plastic parts are brittle. The tambour doors are troublesome. The awning needs replacement.

The second, a 1973, is only 43 years old. Its water heater and furnace appear to work and someone replaced the converter with an inverter but it still doesn’t make 110 from 12v to run the frig. A/C is icy. The shell is nice, bright, aluminum and the rivet joints are sound. The plastic parts are brittle. The tambour doors are troublesome.

On inspection, I found that all aluminum Airstreams have a boatload of steel in them. Every bit of it is on these was well and truly rusted.

These trailers also have a boatload of room and storage, partly because the beds are so small. The bathroom in the ’70 is bigger than mine down south.

All in all, it was a good trip because I didn’t buy either of them. In fact, it would now take special circumstances for me to by a 60s or 70s trailer. Simply too many pieces parts are about to fail after that many years. I reckon I’d be comfortable after a frame-off restoration.

The Not So PTT
Now we get to the challenging part.

I still like to design and build things. Engineer, remember?

I can fit SWMBO and everything I have to carry and even an RV-size washer-dryer into a cargo trailer. There’s room for the three-esses, room to cook, room to sleep, room to poke a ‘puter. There is not room to change your mind.

It’s about a three-week build.

Dixon makes a decent 7×14 Cargo Trailer with windows, torsion axles, and a real plywood floor somewhere down there in Georgia. I’ve been watching the ads up here, though, because I have stuff to haul down from here that would be a lot easier and safer to do with a cargo trailer. In fact, just Saturday, SWMBO saw a nice (used) frig and said, “Don’t you need a refrigerator with a bottom freezer down there?”

The only reason this project works is because I want a cargo trailer because I somehow keep hauling crap around. So. Room for cargo.

Note that I am well aware that either this $5-10,000 solution or the PTT will still take two years to build and cost me twice as much in twice as much gas as just driving, all so I can save $30-40/night on motel rooms and sleep in a Walmart parking lot for free!