Both North and South Puffin are somewhere beyond the end of the rainbow so instant gratification is more than a little difficult here. When I was a child, my family would literally mail an order form to a company like Sears and they would send a box of goodies by parcel post the day after the order reached them.

Mail call was always like Christmas around the Harper household and planning was important because it generally took a few days for the (first class) letter to get to the vendor and more than a week for the package to get back.

Today, we click a button on a website and a fulfillment house somewhere generates a label for same day or next day delivery but the principle is the same.

And some of us still call it mail-order. Heck, I usually counsel clients to ship via the US Post Office. It’s easy, it’s cheap, and it gets there on time, I tell them. In fact, I shipped a box by parcel post to a business up north on Friday. It was in their PO Box this morning. 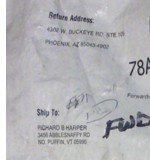 These days, of course, most people my age do. We take anti-cholesterol meds and anti-arthritis meds and blood pressure meds and anti-anxiety meds and anti-dizziness meds and anti-gout meds and antihistamines. We take drugs to combat osteoporosis and respiratory difficulty and heart attacks and sudden bladder symptoms. Then we take diuretics to help us pee. After all that, we really do need the antidepressants.

Anyway, our insurance companies train us all to buy by mail order to save us money and time.

I ordered my usual 90-day refill from the Humana Pharmacy in Phoenix on December 4, 2015.

Humana sends its mail order drugs by US Mail. They drop the bottle(s) in a thin, gray plastic pouch and send it off into the night from the Phoenix PO. 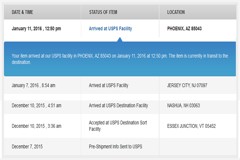 I clicked the tracking link.

Humana sent the “preshipment info” to the US Postal Service the same time they sent me the email notification. The next thing I know, the package is in Essex, Vermont, just three days later. Nobody, least of all USPS, knows how it got there from Arizona.

Except it was supposed to be shipped to South Puffin, not North Puffin.

12/18 email
Your Humana Pharmacy order is on hold.
Our pharmacy team has contacted your doctor to get the information that we need.
Order Number 120128889
Order Status On Hold

From Massachusetts, the package went to Jacksonville and back to Springfield, MA.

12/27 email
Your Humana Pharmacy order is on hold.
Our pharmacy team has contacted your doctor to get the information that we need.
Order Number 120128889
Order Status On Hold

Destination Facility? It was on its way back to North Puffin.

12/29 email
Your Humana Pharmacy order is on hold.
Our pharmacy team has contacted your doctor to get the information that we need.
Order Number 120128889
Order Status On Hold

That was the last email from Humana which still may think they haven’t heard from my doc. It was also the last we heard from USPS for a while.

They did turn up ten days later. The USPS tracking page reported they “arrived at our USPS facility in JERSEY CITY, NJ 07097 on January 7, 2016 at 8:54 am. The item is currently in transit to the destination.”

Unbelievable. Jersey City is *never* in the routing from North Puffin to Springfield MA to Jax to here. Humana shipped December 7. Humana, btw, keeps emailing “Your Humana Pharmacy order is on hold.”

My drugs went to Phoenix.

When they arrived at the “facility” in Phoenix, I called my friend Liz Arden who lives out there somewhere. She promised to look for them. No joy. Meanwhile, I used the “Contact us” link on the tracking page to send them this nastygram:

“USPS has forwarded this package
everywhere except to me. The
package contains prescription
medication that is now almost
a month overdue.
USPS needs to find it and get it
here by January 15, 2016 even
if you have to send it by FedEx.”

On January 16, my drugs were in California and I had not heard from USPS.

I hope they really are the drugs I ordered.

Philadelphia on January 18! It will be interesting to see if the drugs turn north or south; odds on they’re headed for North Puffin again. On the other hand, the postmaster in Marathon called and left a message. She had gotten my nastygram from the website. She didn’t leave a phone number, though. I tried to call back at the phone number given on USPS.com (and at 1-800-Ask-USPS) but the number has been disconnected. Except when it’s busy.

The tracking page said my drugs were still in Philly on January 20 but I did finally reach the Marathon Post Office. A nice rep there said she would send a slip to a supervisor. She also suggested I call USPS customer service.

After 33 minutes on hold at the 1-800-CallUSPS number, the lovely Sammy came on the line. Sammy sounded Chinese which made me wonder. We do know USPS outsources a lot of functions, particularly truck transportation of mail, so I figured it’s possible. I found lots of tin hat sites saying that USPS outsources their call center but no real evidence. One fellow posted this:

“So here’s the deal – I called the USPS to get information on a lost package I had shipped. After 20 minutes of miscommunication, on both ends, I asked, ‘Are you working in India?’
“Response – ‘Yes.'”
“For shits and giggles, I called 1-800-ASK-USPS a few hours later. Had a brief conversation about the tracking of the same package. The accent prompted me to ask, in a pleasant voice… ‘What country are you working out of today?’
“Response – ‘China’.”

Anywho, Sammy promised to have a supervisor find my package, take it out of the forwarding system, and manually send it to me. Yeah, you’re right. That didn’t happen either.

The post office (eCustomerCare National @ usps.gov) emailed me January 23 and apologized for “the inconvenience that you have experienced in regards to the delivery of your package.” The tracking page had had no updates since the drugs arrived in Philly. eCustomerCare National suggested I ask Humana to send a replacement order.

The North Puffin Post Office received the drugs and forwarded them before I knew they had left Philly.

Still, when I called, the clerk there said she’d find them on the truck. She called the Swanton PO to divert them, tracked them down on the truck, had the driver hand the package to a clerk in the Swanton PO. The Swanton clerk had prepared a Priority Mail box so she dropped the bag of drugs in the new box and sent it. They departed the Swanton Post Office at 3:18 pm. The North Puffin clerk called me back with the tracking number. Expected Delivery Day is Monday, February 1, 2016.

January 28. The cool news of the day is that, 52 days after Humana shipped them, a human bean found my drugs put them in a new box, and sent them by airplane.

January 29. According to USPS.com, my drugs arrived in Nashua this morning … and stayed there. USPS.com isn’t very good at updates.

“USPS is definitely not good at updates and communication,” Miz Arden said. “I rarely get information about USPS-based shipments, except those via Amazon or similar company that will themselves track the package and provide the updates. Sometimes USPS provides an update (I suspect the company who shipped with them worked that out with them), but it’s usually the day they ship, and then the day after the carrier placed it in your parcel box.”

They seem willing to tell us when things arrive at (some) entry points but seem to have no idea of departures and waypoints.

This package started in Phoenix, AZ. It went to North Puffin three times, to Florida twice, back to Phoenix, and surfed in California once before winding up in South Puffin after 54 days. You should see all its passport stamps! 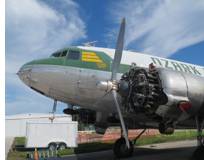 January 30. My drugs arrived! A day ahead of schedule and 54 days after they shipped. And all it took was a real person who put her hands on the package to rip it out of the forwarding system. The thin, gray plastic pouch inside the Priority Mail box looked like it had been ravaged by wolves. And I have no idea what Humana was talking to my doctor about.

At least we now know how to get a package from Phoenix to South Puffin, now. It has to go by way of the Ozarks.