City residents in Plattsburgh NY will be cited and may be fined if they don’t clear the snow off their own property.

The earliest snowstorm on record struck New York, Connecticut and other parts of New England yesterday, burying some areas in more than a foot of snow that closed roads and airports, knocked out power to more than 300,000 homes and turned russet autumn to wintry solitude.
The storm — an Oct. 4 marvel caused by a collision of cold and soggy air masses — was the earliest in the region since the Army Signal Corps began keeping weather records in 1870. It eclipsed one that blew in on Oct. 10, 1925, and it even toppled the 150-year-old unofficial record — a blizzard that almanackers say hit on Oct. 6, 1836. The National Weather Service reported snow accumulations of up to 20 inches in places. Pownal, Vermont recorded 18. It caught forecasters by surprise.
NYTimes, October 5, 1987 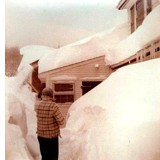 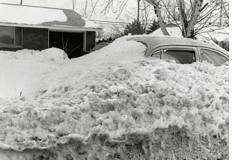 That was 1987. We made it through the fourth this year and no snow will surprise us today. Not even any frost. It was 42°F on the porch with beaucoup sunshine. Mostly sunny all day with a high near 60°F. Mostly cloudy tonight so it won’t get quite as cold.

Now the rest of the story. Getting rid of the snow.

Plattsburgh law requires property owners to clear sidewalks within 24 hours of a snowstorm.

“Some residents have stopped by the City Hall expressing concerns about a fine on top of the snow-removal fee. We’ve had others thinking a fine is the way to go. Many cities throughout New York state, as well as many states, do have a fine that they use,” city Counselor Dale Dowdle told WPTZ.

So if Bobby jumps off the roof, you have to jump, too?

What if Bobby does something dangerous, like rob a bank or do a home invasion?

Plattsburgh law requires property owners to clear sidewalks within 24 hours of a snowstorm.

There are two issues here.

The Fifth Amendment’s just compensation rule applies not only to outright government seizures of private property, but also to some government regulations. “Property is taken in the constitutional sense when inroads are made upon an owner’s use of it to an extent that, as between private parties, a servitude has been acquired either by agreement or in course of time.” United States v. Dickinson, 331 U.S. 745 (1947).

Many states have passed laws that limit the mandates a state government can put on a Town government without money to pay for them. In Connecticut, state regulations on storm water runoff are in contention because they are unfunded mandates.

Imagine the outcry if the law demanded We the Overtaxed People to perform other tasks without just compensation like, say, change our septic systems to mound systems or buy health insurance.

We already do that.

The bottom line here is simple. The Plattsburgh law is yet another example of creep. It’s a government reaching farther and farther into its citizens’ private lives. And we keep letting them do it. It’s an example of the other kind of creep, too.